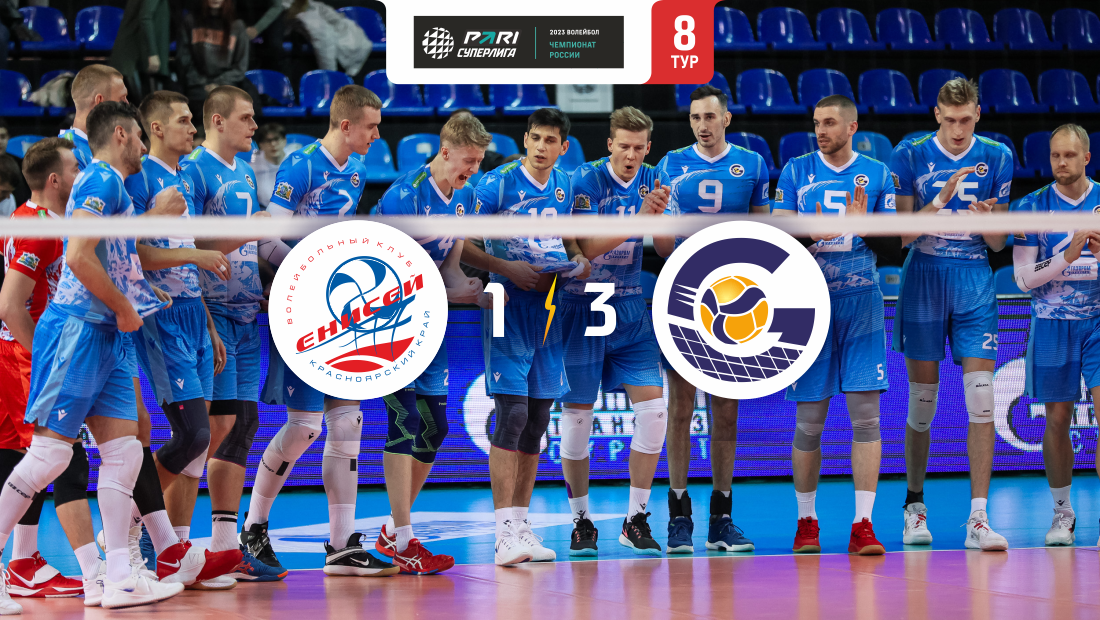 The teams gave out bright in dramaturgy, thrilling match, a real battle of Siberian characters. The Surgut team prepared a surprise - a debutant appeared in the starting lineup and played the entire match, central blocker Dmitry Kurbatov (212 cm). But the surprise was not an equal stubborn struggle from the first draws, in which Dmitry Yakovlev fires team views twice, attack in out. The first break with a break was made by Kirill Piun with the help of a billiard ace into the corner of the site, 14:12. Home timeout, another excellent serve by Piun and Dmitry Makarenko realizes the replay, and then Scrimov gets stuck in the guest block - 16:12. Toward the end, the hosts got sad and started making mistakes.: Skrimov and Yakovlev attack past the site, Osipov's pass does not find the addressee and Milan Katic punishes for it, one more attack of the Bulgarian striker out of bounds… Vadim Ozhiganov puts the point by winning back from the block from the second touch, 25:17.

In the second game, ace Kurbatov helped Gazprom-Ugra catch up with Yenisei at the start, 7:8, but then Dmitriev is removed, and Alekseev in the fourth zone, uncomfortable for himself, from an uncomfortable pass, barely scratches the ball into a block, 7:10. Anton Botin replaces Makarenko, and Ozhiganov is replaced by Maxim Kirillov. 19-summer setter had a good run on the court, but the wave of errors has now gone from the Surgut people, and quite strange. if it is possible to reduce the advantage of Muscovites on the pitch to acceptable numbers (!) whistle about violation of the lineup - and "Yenisei" increases the advantage to +6, 12:17. Katic hits Yakovlev in the shoulder, rebound pick up, and Dmitry himself completes the attack, 12:18. In the next draw, the Serb throws off with both hands under an empty back line - I saw well, but threw it out, 12:19.

Ozhiganov and Makarenko return to the clearing, but the set is gone. The same 17:24, as in the first batch, only this time in favor of the enemy. But… On Piun’s serves, the Surgut team doesn’t win back five set-balls out of seven! And the presentation is good., and the block works, and the owners did not work out the expectation, that the game will end by itself. Still Scrimov finds the touch of the ball on the block, 22:25, but the mood of the Surgut residents is noticeably improving.

In the third set we went one breakball ahead, until Dmitriev sent the ball out of bounds on the second attempt in one rally, 12:9. Here the ace is distinguished by Katic, 13:9. The hosts are not falling apart this time, continue to stick to their line - Maksimov's ace closes the gap to a worker, 14:12. A super-important draw happened a little later, when we fought off Scrimov's repeated attempts in the fourth zone, and Alekseev turned his efforts in defense into a full-fledged break with a blow from the block, 17:13. After such draws, the opponents break down, but not "Yenisei". Releasing Kovalykov and Fetsov instead of Osipov and Yakovlev, Yuri Filippov restarted the command mechanism: now, in a similar protracted draw, Fetsov is already recouping from the block, 17:15.

In the end we go more or less comfortably, but it could be really good, if they brought to mind the free-ball at the mark 20:18. "Yenisei" could well swing the scales in their favor: Fetsov played great defense, partners delivered the ball to him from our side and the diagonal almost scored an emergency ball! Fortunately, we also have fighters on the court and Alekseev is fine, 22:20. And then Nikita one-on-one closes Scrimov's attack, 23:20! The endgame was squeezed through the same Alekseev, 25:21.

Vitaly Fetsov remained on the court in the fourth installment of Yenisei, and his attack brings the owners an advantage 6:3. Rafael Khabibullin's reaction is instant - time out. It worked: Piun raises in defense (!) first attack (!!), and Fetsova covers the block - 7:7. Finally, the branded ace designs Ozhiganov, 9:9. The game comes from the knife and on the balance, rivals invest and lay out on 110 percent - what's on the attack, what's in defense. Katic puts Gazprom-Ugra ahead, Alekseev with a blow on the cable out of bounds gives the advantage, Karbatov ace returns (13:12). Vitaly Fetsov shoots out, and Kurbatov, after the time-out of Enisey, draws up the second ace, 15:12. Our central was lucky, the ball fell off the rope, but it was here that the scales of confrontation tangibly swung in our direction - Alekseev scores twice, 17:13. Vladislav Dyakov heroically drags Skrimov's pipe, but this time the diagonal "Gazprom-Ugra" failed to continue the series, 17:14.

Katic shoots at the right moment - scores in the endgame of the next protracted rally and draws an ace through video review, the ball is lined up, 19:15. Among Surgut residents, libero Dyakov and Nagaets work wonders, but Fetsov seized the initiative on the grid, 19:17. "Gazprom-Ugra", to get out of an uncomfortable position, scrolls double replace, Krasnoyarsk citizens are stopped only by Scrimov's bloc, 20:17. Piun will not hit the court, and Yanutov, in turn, demonstrates miracles, Rajab's attack was raised - the ball seems to go into touch on a steep trajectory on our side, but "clings" the line, 20:19.

Captain Makarenko takes the floor - scores the allotted ball "under the skin", and then deceives half the opposing team with a discount, 22:19. The hosts persist - they are removed through Fetsov and block Alekseev and Makarenko, 22:21. Pickup through the fourth zone is not a strong point of Gazprom-Ugra, this time Katic is closed, 23:22. maybe, should have been given to Alekseev? Yes, in the next draw, Nikita, with all the sporting anger, tears off his hands on the block, 24:22. Dmitriev confidently withdraws from Krasnoyarsk, and after Rafael Khabibullin's timeout puts an end to, of course, Nikita Alekseev. And then Yanutov was there and almost saved, But not at this time, 25:23.

“Yenisei” huge respect for the fight. The command showed, due to which she won four victories in a row - very confident, uninhibited, I would say, biting game. But Gazprom-Ugra played, perhaps, best league match to date. Dyakov and Nagaets lit partners with confident play and emotions, Alekseev was reliable and saved a lot, Makarenko spent, as always, a huge amount of rough work and was very helpful at the most necessary moments for this, withstood the general level of Katic, centers looked pretty stable, feed was flying, Ozhiganov was at least confident in himself and in his decisions. We have, of course, and bottlenecks - but today I don’t want to talk about them. Surgut played in Krasnoyarsk with inspiration, on character, having won a difficult victory over a very serious opponent. Let's enjoy this, leaving the discussion for later.

Towards the sun
Артем Хабибуллин: "I'm on schedule"
Last news