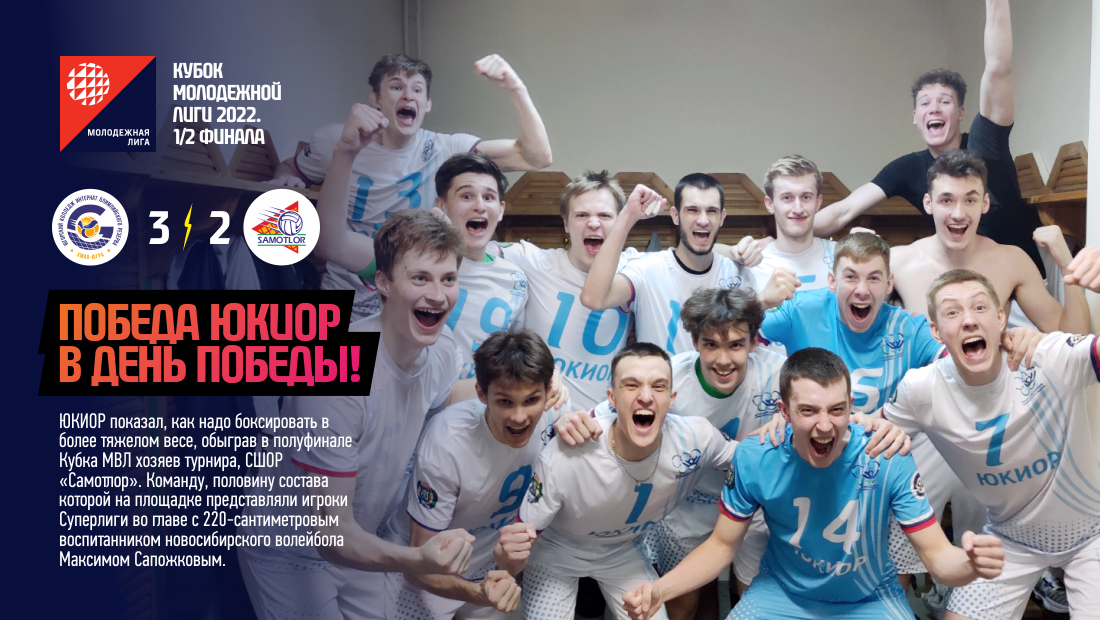 YUKIOR showed, how to box at a heavier weight, beating the hosts of the tournament in the semi-finals of the MVL Cup, USSR "Samotlor". team, half of the composition of which was represented on the court by Superleague players led by a 220-centimeter pupil of Novosibirsk volleyball Maxim Sapozhkov.

In the first game, the diagonal player from Nizhnevartov scored eight points in attack and scored an ace, making that difference, which did not allow our guys to catch on to the game, 25:16. But already in the second set, YUKIOR at first did not allow the opponent to develop what had been achieved, and then, thanks to two aces of Maxim Kirillov, he took the lead, 12:10. Submission decided: Litvinenko and Skvortsov exchanged innings right through, Alexander Sappo, who came out specially for this, successfully introduced the ball into the game, providing Oleg Lagis with an easy prey in the form of a challenge ball – 16:13.

Then Sapozhkov took the floor again.. He starred, and after that he issued a series of five (!) aces in a row. And our hosts, by and large, nothing to blame - balls flew with such force. 16:19 and the other team would immediately break down, but not YUKIOR on Victory Day. The block of Surgut people makes the attackers of Samotlor make mistakes, including Sapozhkov, and now Valery Pyaskovsky is forced to take a timeout, yielding 19:20. Nazar Litvinenko, not accustomed to playing in reception, floats and gives way to Alexander Potapov, which is immediately eaten in a block, 23:20. Sapozhkov wins back, and Skvortsov's block reduces the distance to a minimum, 23:22. In the nervous ending, Maxim Kirillov trusts the ball to Konstantin Bessogonov, who has just entered the court, and the effect of “did not wait” is obtained. On a set-ball, the same Potapov attacks out of bounds, 25:22.

In the third set, blockers of YUKIOR picked up the keys to Sapozhkov, covering his attacks twice, 5:3. Yudenkov's glider catches Goncharenko by surprise, 7:3. it seems, that the Nizhnevartovites did not expect such resistance and, out of confusion, they begin to serially make mistakes in the attack, 14:8 after another shot past the site by Litvinenko. Against this background, Slobodyanyuk is stable, successfully connects Bessogonov. When Sapozhkov and Litvinenko got completely upset, Maxim Kreskin switched to the first pace, but it was too late 23:16. Sapozhkov still gets a break after a successful defense, but the pitch into the net and the discount in touch by the hosts complete the work for Surgut, 25:17.

The fourth set gave the fans a lot of lingering beautiful draws with selfless defense. Ours was a little less lucky in the end, so the score 12:14 after Bessogonov's attack on the block on the break ball looked, what is called, workers. But then Sapozhkov cut through again - ace plus replay, 12:16. Ace also emerges from Daniil Goncharenko, 13:18 and "Samotlor", feeling confident, starts to take the set. A powerful blow from Kirillov and the emotions of our setter at the end of a long rally - the last attempt to change something, 17:21. "Samotlor" again connects the first pace, and Artem Khabibullina's military cunning, Sapozhkov, who replaced five players at once on the set-ball, does not change anything - Goncharenko wins back from the block, 19:25.

Decisive set - a game of nerves. The owners of nosebleeds need to win, because the scenario with winning the Cup at home has already been written and signed. Kreskin predictably builds the game exclusively through Sapozhkov, that's just the diagonal ate and began to fire outs, 4:2. Another miss of Maxim - 7:5. Litvinenko and Sapozhkov restore the status quo, but Slobodyanyuk shook the balance before the change of sides, having got out with a prudent discount to the first zone from a difficult situation at the end of a long draw (wherein, by the way, YUKIOR raised another Sapozhkov attack in defense).

Surgutians keep the extracted, and Skvortsov, with an attack and another cold-blooded discount to the first zone after another attack raised in defense, Sapozhkova gets two precious breaks, 11:8. The leader appears in the ending - Ivan punches Litvinenko in the chest, withdrawing from the filing of Sapozhkov, 13:10. Vagaytsev is filming, but the nerves of the owners were still weaker: Goncharenko sends out, and Litvinenko stumbles upon a block, 15:11.

This victory is in some sense the answer to that, why at the youth level it is necessary to deal precisely with the development of their own youth, not paying attention to the possibility of "pumping". The immediate result is not so important, how important is the opportunity through such matches to become a Team with a capital letter, gaining invaluable experience of playing with older, experienced, skillful rival. Hired masters will come and go, taking with them the victory, and defeat, and the current victory will remain in YUKIOR for a long time. Tomorrow is the final against Dynamo-Olympus, international champion. We have already lost to them in the group stage, but something tells, that the ending will be completely different. In any case, the team of Artem Khabibullin has already achieved an excellent result and tomorrow they will have the opportunity to play for their own pleasure, regardless of final score.

from command: Today the main setup was like this: believe in victory, try to play the game, to make Sapozhkov tired, not reacting to his successful actions in any way is like getting caught in the rain, you won't get mad at him, and he shouldn't be pissed off. The boys took turns taking the lead., everyone was maxed out, including spare. All well done, except for the first game, they played very clean and smart.

YUKIOR made it to the semi-finals of the International Cup
Thanks for the season, youth! YUKIOR has the "silver" of the MVL Cup
Last news