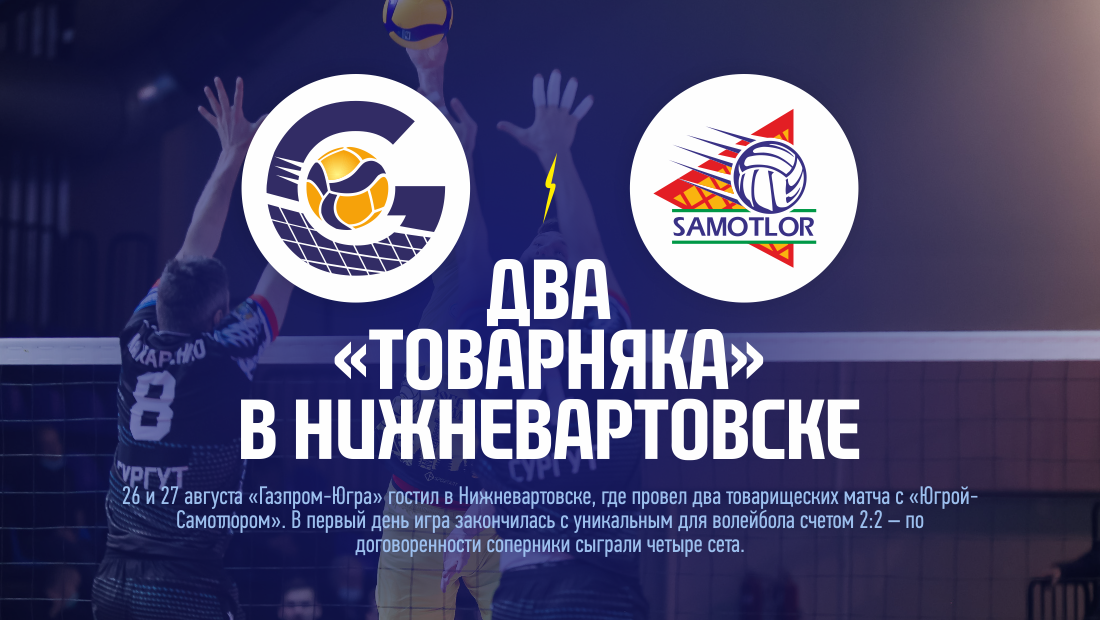 26 and 27 August Gazprom-Ugra visited Nizhnevartovsk, where he played two friendly matches with Yugra-Samotlor. On the first day the game ended with a unique score for volleyball 2:2 – by agreement, the opponents played four sets.

The first two games were left for Surgutians with the same score 25:19, in the third and fourth we lost 24:26 and 17:25 respectively. In the first three sets at Gazprom-Ugra, Vadim Ozhiganov passed diagonally with Nikita Alekseev, Maxim Kirillov and Rajab Shakhbanmirzaev entered the fourth game in the starting lineup. Kirill Ionov played the entire match in the center of the grid, and Kirill Piun was replaced by Pavel Tebenikhin in the fourth set, in the replay there was a wide rotation with the participation of Kirill Kostylenko, Dmitry Krasikov, Dmitry Makarenko and Anton Botin.

As expected, Nikita Alekseev became the most productive player with 14 glasses (59% effectiveness of attacking actions), four aces were designed by Vadim Ozhiganov, three more points he scored in the attack, showing 100% performance in this element. Kostylenko and Ionov scored six points each, a newcomer from St. Petersburg "Zenith" put three blocks. Vladislav Dyakov played three sets, demonstrating 61% positive reception. All in all we conceded on the block (8:13) and serve (4 ace vs seven), but were more effective in attack with approximately the same reception.

The second match the next day Gazprom-Ugra won with a score 3:1 (25:18, 16:25, 25:19, 25:23). Again, there was an extensive rotation on the site: this time the playing time was equally divided by Vsevolod Abramychev and Vadim Ozhiganov, Nikita Alekseev was replaced by Rajab Shakhbanmirzaev in the third set, who became the most productive player in the Surgut team - 11 points at 55% efficiency in attack. 9 points scored by Kirill Ionov, re-delivered three blocks. Eight points each on Nikita Alekseev's combat score (54% efficiency in attack) and Dmitry Makarenko (44%), seven scored by Anton Botin (55%), six - Dmitry Krasikov (50%). Vladislav Dyakov demonstrated 56% positive reception in the first two sets, and his colleague Nikita Nagaets - 67% in the third and fourth segments of the match.

This time we minimally lost on the block (8:9), withstood the pitch on equal terms (by 8 aces), but with better reception (54% on 47%) failed to win the attack (by 46%). Nizhnevartovsk residents made a little more of their own mistakes (29 against 23), at the same time, it was better to attack from a positive reception, and we - from the negative. It should be noted, that Ivan Ropavka did not go to Nizhnevartovsk, who has not yet fully recovered from the injury, and a little ill Alexey Kabeshov.

It makes no sense to draw any far-reaching conclusions from the sparring conducted: games became part of pre-season training and both coaching staffs solved their problems, often not related to achieving a positive result on the scoreboard. Nevertheless, food for thought received. Our own conclusion: Gazprom-Ugra will be a combat-ready team! Newcomers did well, do not lower the bar "old-timers". Matching process in progress, especially relevant due to the completely changed line of binders. This process will continue at the September cup games in Kazan, and we will be ready for the start of the championship.

raise a son, build a house, to plant a tree…
We are from gas
Last news