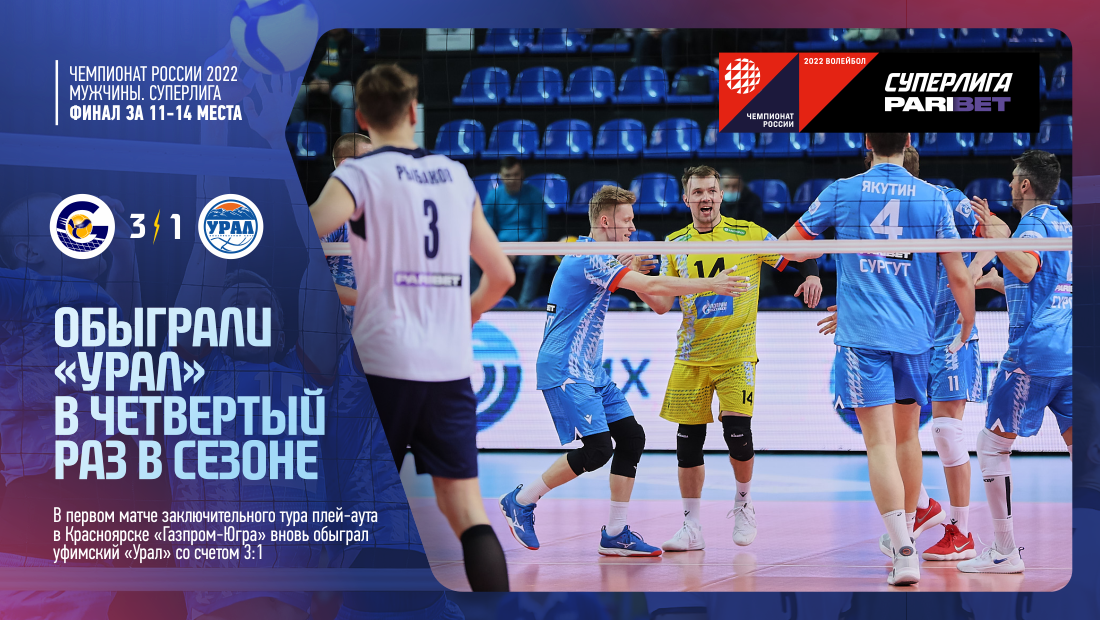 In the first match of the final round of the play-out in Krasnoyarsk, Gazprom-Ugra again beat Ufa Ural with a score of 3:1. Maxim Shemyatikhin appeared in the starting lineup of the opponent instead of Evgeny Rybakov in the diagonal and immediately landed in the single block of Kirill Kostylenko, 4:1. Another block to Maxim - 6:2. Yegor Yakutin rages on the net, closed and Demakov, and Gutsalyuk (11:6), and softening other attacks of the Ufimians. At the innings of Artem Dovgan Surgut advanced to 14:6 and Rajab Shahbanmirzaev had a great opportunity to go even further, but in the playoff he doesn't line up the ball on a single block.

It's okay - the extracted advantage allows you to easily enter the ending, 20:11. In a traditionally difficult line-up, with the release of the setter from the first zone, the Surgut team stalled, Dmitry Makarenko failed to act twice, and Nicolas Marechal was effective in response, 20:15. A timeout helped - Rajab scored from the fourth zone and the remaining handicap was enough to win the set, 25:20 after filing Feoktistov into the net.

The second set "Ural" started with Rybakov and Bagrey, who came on as a substitute in the first game - their errors on the serve and Rukavishnikov's ace, shortening the feed through the cable, indicate a slight advantage of Gazprom-Ugra, 6:5. Further more: block to Rybakov from Rajab, Makarenko's attack on the emergency ball, 8:5 and opponent's timeout, in which Ural head coach Yuri Lissitzky invites his players to send "evil to the other side". Marechal in the corporate style wins back from the hands, but right there Makarenko does not let Rajab hang in the fourth zone, and the block to Feoktistov (10:6) forces Lissitzky to release Roman Zhos again.

Stalled in the attack effective (60% in attack at the end of the match) before and after that marechal, 16:11 and cloudless sky? No matter how - "Ural" begins to bite off one break and rapidly reduce the distance. Protracted draws are increasingly ending in favor of Ufa, Rybakov in the endgame of one of these, when Makarenko and Shakhbanmirzaev failed to fulfill themselves on difficult balls, reduces the distance to a minimum (21:20), and soon Marechal ace puts the game in swing mode, 22:22. Taking turns filming, rivals reach the first set-ball of Surgut (24:23), but the set can be completed only on the fourth attempt. Instead of Makarenko, Nikita Alekseev comes out to strengthen the block, and after mitigating Gutsalyuk’s attack, he has a chance to find a gap in the block - 28:26.

In the third set, our guys reduced the pressure on the pitch, and the Ufimians who received a charge of confidence began to get a lot. Shishkin worked excellently at the reception and in defense, Rybakov were effective on the net, Feoktistov and Marechal. We got hooked on the quality of reception, and an effective attack was built mainly through Rajab, and the players lost their balls according to the formula "downed reception - high ball - hit in the block". Attack on the Kostylenko block (9:12) partially compensated for Dovgan's ace (11:12), and then there’s Marechal, after another powerful serve by Artem, hits the emergency ball into the cable, 12:12.

Lissitzky calls his fighters “not afraid to win” in a timeout, and they begin to take the game through a good pitch and protracted draws. Twice accurate Marechal, 16:18. Excellent game by Kabeshov and Shishkin, the last word for Rybakov, 17:20. After submitting Gutsalyuk to the network (19:21) the chances were still there, but Feoktistov confidently withdrew, and then implemented the replay after, how Shishkin raised the attack of Kostylenko 19:23. Again, an uncertain reception, Rajab tries to cheat - unsuccessfully, Rybakov returns the ball with a kick to the fingers, 19:24. Alekseev appears again, but the set floats away, despite the insidious gliders of Kostylenko, Nikita realizes one extra game, and leaves the second to be eaten by the block, 21:25.

We are the fourth party, what is called, endured. "Ural" led until the middle of the set 1-2 points, Piun, who came out instead of Demakov, drank a lot of blood. Rybakov's attack in touch restores the status quo, 16:16, Feoktistov lubricates the reception and attack, Rajab replies - 17:16. The ending goes under the sign of Rajab - his ace gives us some air in the endgame, 20:18. Playing ball in his performance after Rybakov's pulled out attack - 23:20. Marechal block brings match balls, 24:21, the Frenchman wins back from the block, but Rajab is indefatigable, 25:22.

After this victory, Enisey's chances to overtake us in the fight for 11th place are reduced to a minimum.: Krasnoyarsk need to win all three matches, provided, that we will lose the remaining two fights. Everything can be decided today, if the hosts lose to Neftyanik from Orenburg.