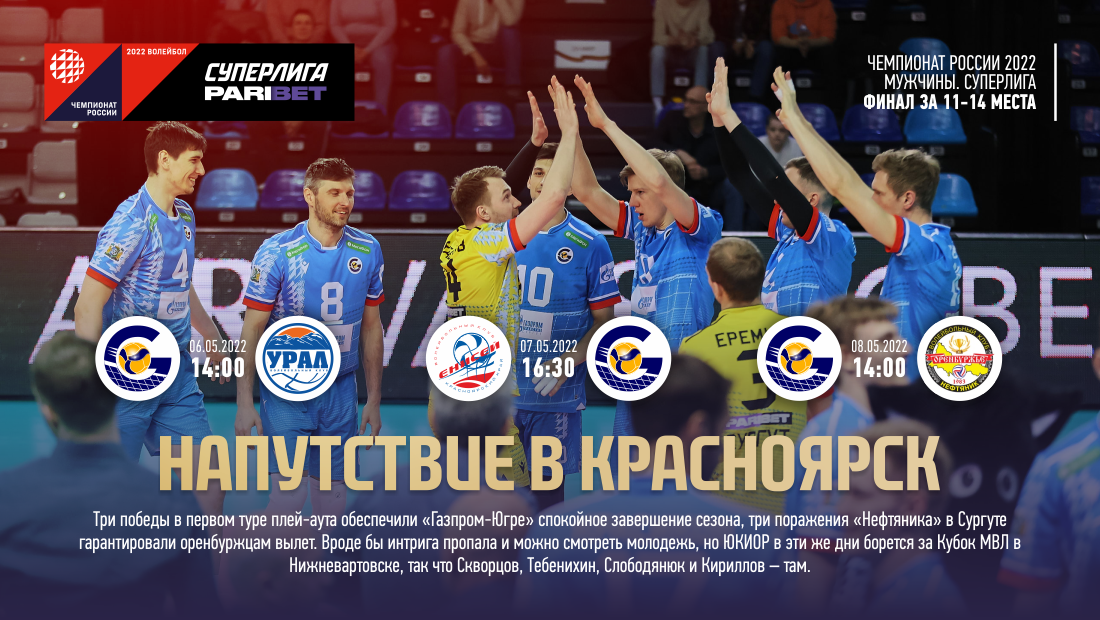 Three victories in the first round of the play-out provided Gazprom-Ugra with a calm end to the season, three defeats of "Neftyanik" in Surgut guaranteed the relegation of the Orenburgers. It seems that the intrigue is gone and you can watch the youth, but YUKIOR on the same days is fighting for the MVL Cup in Nizhnevartovsk, so Skvortsov, Teenihin, Slobodyanyuk and Kirillov are there. Besides: with what mood did the Ufimians come to Krasnoyarsk and how will Enisey play at home?

And generally speaking: why fight for 11th place, when you wanted to rise above 10th? No other questions answered, and this one has: professionalism. Desire to win regardless of opponents and circumstances. Last year we finished 12th - why not climb up a notch? Proving to myself, that defeats do not break, but they teach. And victories heal.

The victorious three matches in Surgut lay like a balm on the exhausted souls of the fans. 'Cause the games weren't easy, and opponents are weak, there are none in the Superleague. Yes, there are top clubs, there are nominal middle peasants and outsiders, but between most of the teams there was not an abyss, and a distance of one or two regular season wins. "Oilman" failed, but right behind him - "Ural", who played 13 (!) matches in five games. And there we are with the "Yenisei", ASK, who made the difference with crazy victories (remember the Dynamo defeated in Moscow), "impudent" youth from "Torch", uncompromising Samotlor… Who would be surprised before the season, if in the play-out instead of "Yenisei", Gazprom-Ugra and Ural would play Samotlor, Fakel and ASK?

This is me, that about half of the Superleague is about equal in strength. Everyone deserves their place in the sun, but the weak and helpless are not here. And the price of victory, any, at the start or end of the season, against the backdrop of injury, fatigue and lack of apparent motivation - high. Games in Krasnoyarsk, may be, and have no special tournament value, but they are important for team health. This is not physical therapy, this is a real battle - a healthy team will go through this test with their heads held high.

Such a lyrical digression before the start of the last three games of the season. Our team pleases us at the end, why don't we please her with at least mental support? Guys, left just a little bit, try to play for fun and not get hurt.