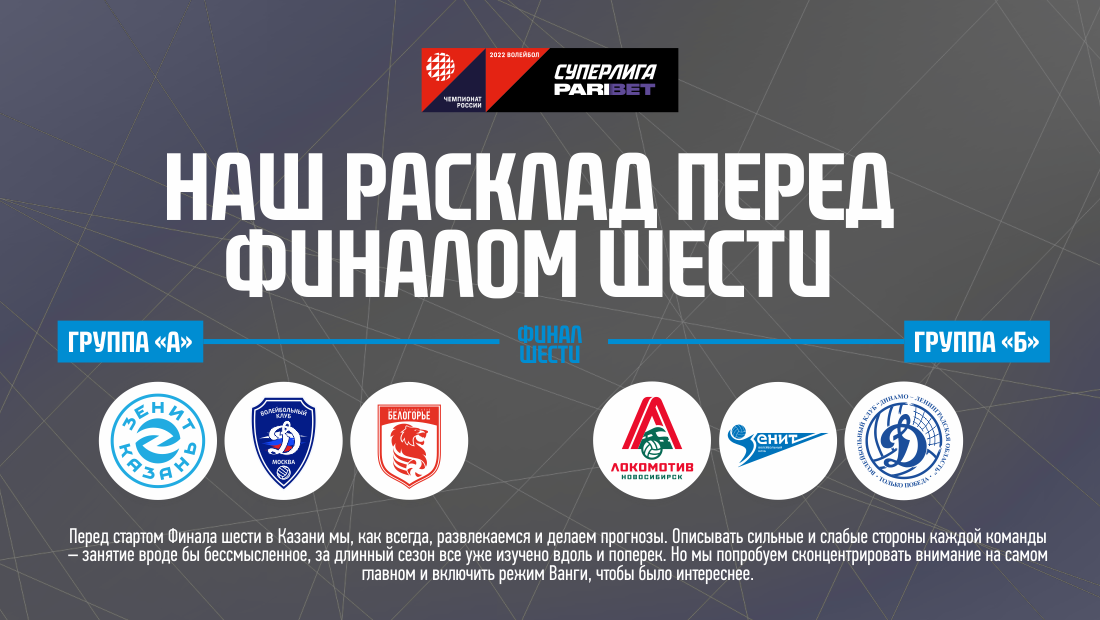 Before the start of the Final Six in Kazan, we, as always, have fun and make predictions. Describing the strengths and weaknesses of each team seems to be a pointless exercise, for a long season, everything has already been studied up and down. But we will try to focus on the most important thing and turn on Vanga's mode, to make it more interesting.

The strongest weapon – interaction between Mikey Christenson and Dmitry Volkov.

Vulnerable point - winner syndrome. The unbeaten streak in all tournaments has exceeded the fourth dozen games, and such chains purely mathematically tend to break. Now is the most inopportune moment..

Personal motivation – Bartosz Bednoz needs to gnaw out a place in the Polish national team.

Vulnerable point - Tsvetan Sokolov is not getting younger.

Personal motivation – Vadim Likhosherstov has something to say in Kazan.

Personal motivation - It's time for Dmitry Kovalev to break the image of "eternally promising".

Secret weapon – Nemanja Petrich can wake up from sleep mode.

Kazan must win the group. For the sake of intrigue, we will put Belogorye in second place: the team is able to cling to Dynamo, Al-Khachdadi - outplay Sokolov, Kovalev - Pankova, and all this under the condition, that the Muscovites will not fly feed.

Vulnerable point - the game may fall down.

Personal motivation – Semyon Krivitchenko has a chance to move to the “top” category.

Vulnerable point - Andrey Tolochko did not manage the game at such a level.

Personal motivation - Fedor Voronkov will look for an answer to the question, which is better - to play or to win.

Secret weapon - Egor Klyuka. The secret is in his condition, not potential.

The strongest weapon - nothing to lose.

In group B, the intrigue is much more serious, than it seems. "Zenith" can be like the first, as well as the third, Lokomotiv will reach the semi-finals - but from what place? And will Dynamo-LO create a sensation?? One thing is for sure - everything will be decided 6 May in a match between two northwestern teams. In the regular season, Zenit Sosnovobors beat, here is a match of another level. Our Vanga bets on Zenit - due to the advantage in the positions of libero and setter.

In total, in the semi-finals we will play Zenit-Kazan with St. Petersburg teammates, as well as Lokomotiv with Belogorye. Then we will continue to play pranks and assume, that "Belogorye" will catch the courage and beat Novosibirsk (here, of course, all the stars must align), and the St. Petersburg team will defeat Kazan in the same way, in the game of which the same misfire will occur. Unmotivated Zenit-Kazan will lose to Lokomotiv in the bronze medal match, and in the final St. Petersburg "Zenith" will beat "Belogorye". Now such a forecast smacks of a hospital, but let's see. Motives for such a scenario exist in nature., the only question is, will they be implemented.