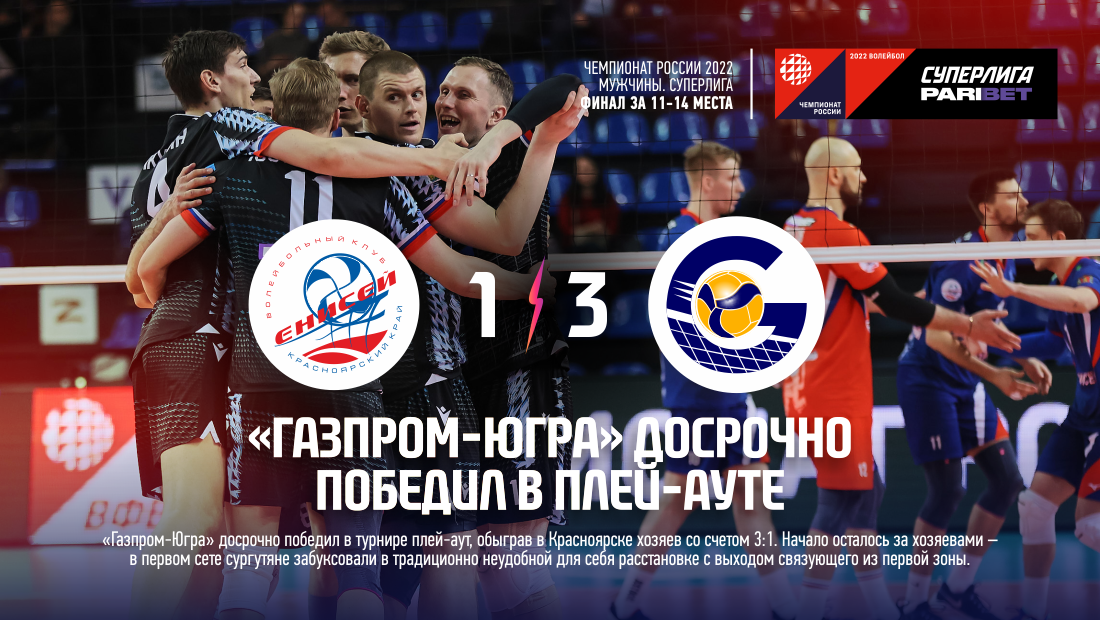 Gazprom-Ugra won the play-out tournament ahead of schedule, beating the hosts in Krasnoyarsk with a score 3:1. The start was up to the hosts - in the first set, the Surgut team stalled in a traditionally uncomfortable arrangement for themselves with the release of the setter from the first zone. Score 9:10 turned into 9:14 - "Yenisei" alternately caught Makarenko's block, Shahbanmirzaeva and Dovganya. Next, the Surguts tried to level the gap, they managed to get close a couple of times: 16:17 after Jesus Shahbanmirzaeva, 18:19 after his attack, but ... The key episode occurred at the mark 19:21 - we had a freeball, but Dovgan's discount was raised by Yanutov, and Klets bounced back from the block. As a result, the Krasnoyarsk team "reached" the end of the game, waiting for the submission of Dmitry Krasikov, who came on as a substitute, into touch, 21:25.

The second set can be safely named after Rajab - the diagonal Surgut team realized 13 attacks, only made a mistake twice. In one episode, Shakhbanmirzaev attacked four times in a row! Such a load is not from a good life, since there was no need to wait for special support from the fourth zone (Kostylenko could not replay the block in any way), but Rukavishnikov did not dare to connect the first pace. On the other hand, if the diagonal is playing - why not use it?

Dmitry Makarenko helped with an ace - 10:9. Yenisei regained a shaky lead by blocking Kostylenko and waiting for an obvious pass to Radjab, 12:13. Kirill Klets became active, starring, finishing off a protracted replay and issuing an ace, 13:16. Rajab answers with two accurate attacks, and the Surgut block closes Gavrilov in the fourth zone, 16:16. In the same four-hit rally, Shakhbanmirzaeva Valeev hits out, but the review taken by the opponent fixes the absence of a millimeter gap between Rajab's feet and the three-meter line, 19:19 instead 20:18. Makarenko comes to the rescue in a difficult situation, having withdrawn from the second zone in a problematic arrangement, 22:20. Well, the ending is squeezed by Rajab - two of his attacks bring three set-balls, 24:21, Gavrilov does not put the decisive ball in line, 25:21.

In the third set, instead of Osipov, the hosts left Kovalikov to pass, Valeev draws up an ace (7:9), and Rajab does not beat the block on the allotted ball (9:12). Rukavishnikov shifts the focus to the center of the grid on Yakutin in time, and Rajab's excellent serves allow you to overtake the "Yenisei", 12:12. Instead of Kostylenko, Krasikov comes to the front line and helps on the block and in the attack (18:18), Makarenko copes well with receiving the most powerful serve of Klets, Rajab turns on again, and Krasikov knocks out an ace in Yanutov (!) 21:20. The balance is up to the mark 23:23, Rajab brings the first set-ball with a blow from the block and converts it himself in the endgame of a protracted valid rally with a double-edged fight, 25:23.

The defeat in the third set emotionally crippled the hosts. Instead of Klets, Fetsov entered the diagonal, Kovalikov reappeared, and the people of Surgut began to take over the fourth batch, twice blocking Fetsov's high-speed attacks, 12:9. Yakutin knocks out an ace in the joint between Yanutov and Gavrilov, 14:10. Rukavishnikov also soon sends a serve right through there., 16:11. Block to Valeev from Dovgan fixes the maximum advantage of Gazprom-Ugra (18:12), and Yury Filippov's timeout brings the Yenisei back to life. Realizing, that the chances of winning finally disappear, the hosts began to act liberated and decisively, and the subconscious intentions of Gazprom-Ugra to reach the finish line with minimal resources did not work: Krasikov in the block (20:16) on a low ball, Makarenko in the same place after poor-quality reception (21:18).

Rajab doesn't line up the ball, 22:20. Rukavishnikov finishes off a passing ball after Dovgan's attack (the ball is kicked up by Maxim Kulikov) – 23:20 and, it seems, that they lasted. But Kulikov finishes off the ball on the second attempt at the shooting, and Rajab gets blocked in a protracted draw, 23:22 and the evening ceases to be languid. Our diagonal in the fourth zone, and on the pitch - Kirill Klets with his powerful gun. Good, she shoots out, and then Shakhbanmirzaev's attack in touch through video review finds Kulikov's finger touch, 25:22.

Not easy, hence more valuable, victory, which ahead of schedule brings Gazprom-Ugra 11th place in the standings. This is not the position, which Surgutians would like to take, but in the circumstances - the best option possible and even a small, but a step up from the previous season. We missed a lot of things in the game plan, but you can’t refuse the guys dedication and desire to win. The season ends on an optimistic note - tomorrow the decisive game with Neftyanik from Orenburg and the long-awaited vacation for the players and the time for reflection and decisions for the club's management.

Beat Ural for the fourth time this season
six out of six: season ended on a positive note
Last news