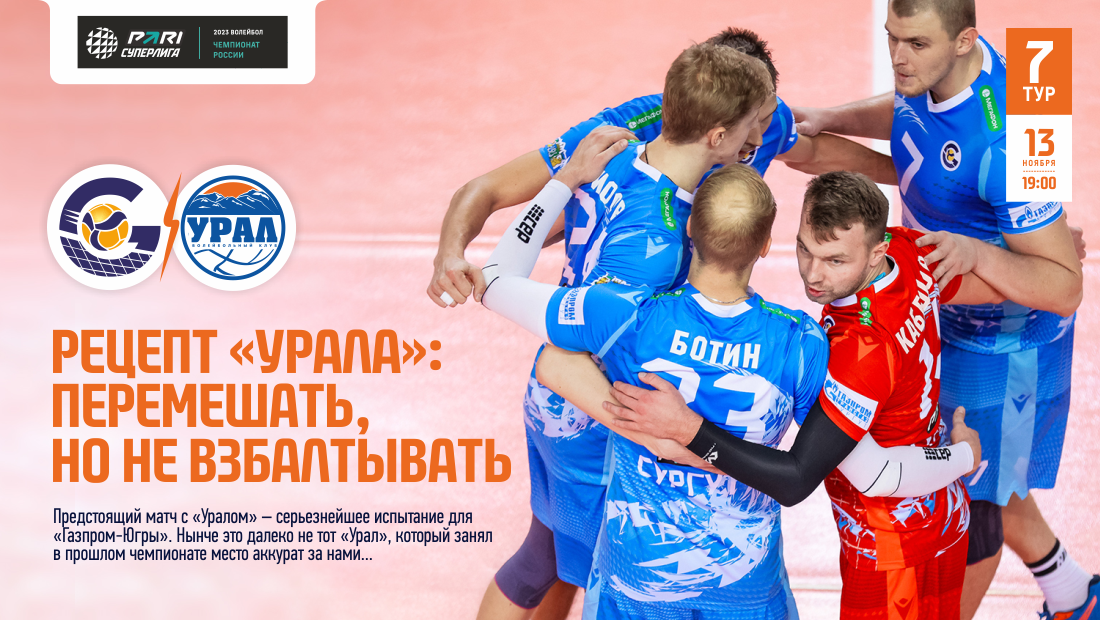 The upcoming match with Ural is a serious test for Gazprom-Ugra. Today it is far from the same "Ural", who took the place in the last championship right behind us. In fact, the team has doubled, recruiting in the off-season a new line-up of the main characters, while leaving the backbone of the "oldies". Now the Ufa players could play with two almost full-fledged sixes.

Trinity Potaluk, Demakov and Esfandiar are tall 210 see everyone is responsible for might, well, let alone experience ... One pair of Gutsalyuk-Samoilenko centers is worth something. Kavanna, sensationally led the Polish "Zawerci" last season to the "bronze" of the championship of Poland, more than compensates for its 188 see the speed and quality of transmissions, well, and further down the list ... Over the past six rounds, Ural frankly failed only one match, in Kemerovo, lost in the first round to Dynamo-LO, and the rest - the victory over the "Torch", "Belogorye", ASK and Samotlor.

Perhaps, the current resource of "Ural" was not so high from the historical for the club 2013 of the year, when the Ufa team won the championship silver with Vissotto, Verbov, Falaska, Abramov, Spiridonov, etc.. as part of. by the way, then played for Ural and Samoylenko, and… Nikita Alekseev. With "Ural" our diagonal has a lot in common, like Kirill Piun, who played for Ufa a couple of seasons ago. And Anton Malyshev is also working as a head coach in the current Ural, ending his playing career and starting his coaching career in Surgut.

I would call Ural the favorite of the upcoming match, if not for one "but". "Gazprom-Ugra" knows how to pack up and rest against the most serious rivals at home, what we have witnessed. Upcoming game, in my opinion, will be a full-fledged debut for Milan Katic – all the Serbian’s previous games for Surgut were, rather, introductory. You can also talk for a long time about the mental growth of Vadim Ozhiganov, about the motivation of Alekseev and Piun, and also about, that the Ufa Iranian is still unstable, like Feoktistov, and Cavannah opens up tasty prospects in attack.

Volleyball is chess in motion, it's muscle-pumped intellect, how powerful is the game, so thin, where sometimes everything is decided by the smallest nuances and barely noticeable strokes: no one will draw a full-fledged portrait of the upcoming game in advance. Unless the coaching staffs write down the probable actions of the opponent in the analysis. And the fans are left to look forward to a fascinating story, wait for a nice game and hope, that our team will win. To have a little more hope, come to the Premier Arena, cheer for Gazprom-Ugra!

Round seven: still on reboot!
Belated pursuit of the "Ural"
Last news