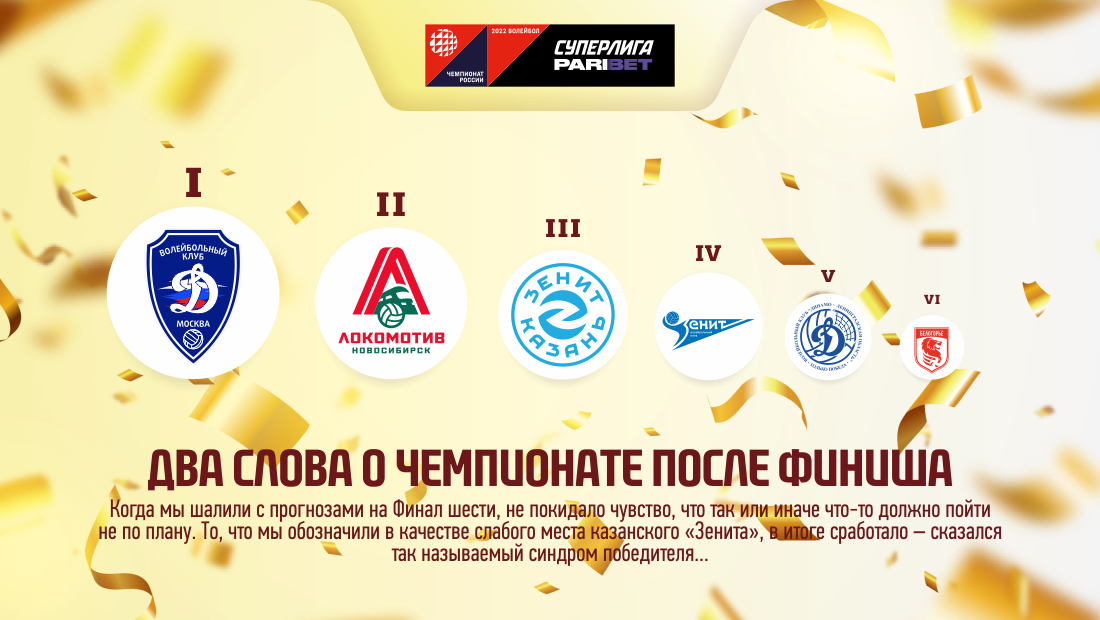 When we were naughty with forecasts for the Final Six, did not leave the feeling, that one way or another something must go wrong. the, what we have identified as the weak point of the Kazan "Zenith", in the end it worked - the so-called winner syndrome affected. “The unbeaten streak in all tournaments has exceeded the fourth ten games, and such chains purely mathematically tend to break". Broke on the Lokomotiv, showing fantastic volleyball.

A "Dinamo", lost in the group to Kazan, competently laid out forces at a short distance and snatched the fifth set from the hooked Novosibirsk. And here, of course, again a lot of questions about the format of the final stage of the championship. In terms of entertainment, repeat, no matter what format to play. Everything determines the content of what is happening on the site, and the plot, compressed to two or three matches, only adds pepper. But in terms of sports fairness of the playoff series to three wins, of course, more objective in identifying the strongest. At the same time, one must remember, that objectivity in team sports is a relative thing, like in any game.

The game in the Final Six was at the highest level: and dramaturgy, and sports content. And if about objectivity, then at the moment there are three superclubs in Russia, the difference between them comes down to details and nuances, and sometimes - to a couple of game episodes. "Dynamo", Lokomotiv and Zenit-Kazan create more than just intrigue at the top of the Superleague, and determine the quality of the championship, remaining, in our opinion, in the top 3 club tournaments in the world, along with the Italian Serie A and the Polish Plusliga.

No less important for any league, who props up the leaders, and here too there is room for optimism. Shot project "Dynamo-LO", Gaining former power "Belogorye", without a doubt, will add young "Torch", “Kuzbass” will try to return ... St. Petersburg “Zenith” stands apart, having a scattering of stars of the first magnitude - his ambitions so far far exceed the result, but the potential remains crazy. In the face of this club, Russian volleyball has the right to count on the expansion of the "troika".

Now emerge from the barrel of honey and see, what's in the spoon. Volleyball, like any other sport - a combination of school and resources. There are also questions about, and to another. There are not so many teams involved in the systemic development of youth, while its own quality reserve is turning from just an important factor in moving forward into a critical one. Is considered, that “import substitution” in volleyball will not seriously affect the level of teams and the Super League as a whole, but without fueling young talents, these are just words. There is a Torch, «Lokomotiv», "Belogorye", piece goods capable of producing "Dynamo", Ugra clubs work quite effectively (true, residents of Nizhnevartov took the path of promoting the Novosibirsk school), what about the rest? And not only this is the problem., a - in the destroyed and not restored anew system of the Youth Sports School, when in every small town a talented child had a chance to break through to the top.

As for resources, it's no secret, that they are distributed very unevenly. clear, that communism, Glory to God, nowhere, but between the major league "A" and the Super League - the abyss, between the bottom of the Superleague standings and its first teams is another chasm. Here the sports and organizational components come into contact with economic realities, but to a greater extent - with a lack of motivation among potential sponsors. The problem has both legislative aspects in the field of the same taxation, and flaws in the manufacture of a product called "Russian volleyball". meanwhile, it is volleyball in our country that represents perhaps the best combination of price and quality, when for relatively little money you can issue a world-class product.

All of these are topics for thought and, we hope, making concrete decisions and steps. When else to think about the future, if not after the end of the next cycle of the country's largest volleyball project called the Superleague?

Russian championship 2021-2022 years became history, very interesting and memorable history. Everything was here: and shattered hopes, and subverted idols, and the ups of those, who was not expected, and rewards for patience and dedication. What's next? Going on vacation, all teams without exception ask themselves this question. And they answer: next is volleyball. The game is our life, so it never ends. We are waiting for transfer news and dream of becoming better!

"Ural" is approaching the "Yenisei"
To be epic. Around the new Super League format
Last news