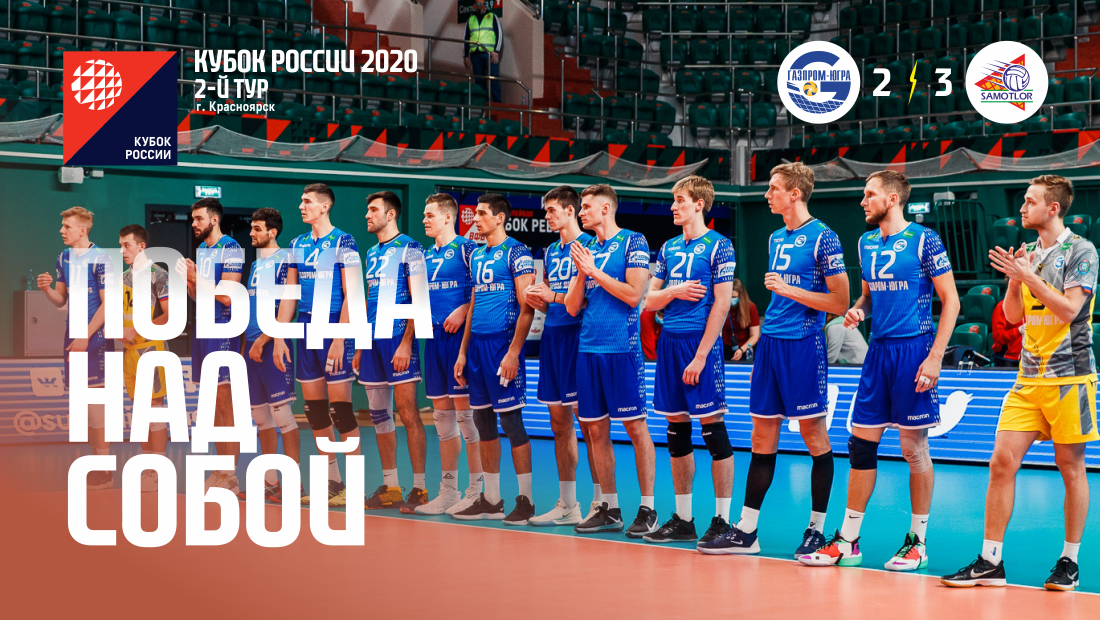 Although the protocol is listed 2:3, today Gazprom-Yugra won a strong-willed victory over itself - after all, it was with itself that the team fought on the site. The opponent earned a protocol advantage of two points honestly, although the judges tried hard, so that it is not so. anyway, everyone at the preliminary stage of the Cup of Russia solves his problems. Ours was to understand, that we are a team, able to fight.

I don't know, what about players with lactic acid in their muscles, only the start of the match looked like this, as if our every movement is given with pain. Difficulty fighting an opponent, when you first need to deal with yourself. Marriage, marriage, marriage - in reception, in transmission, in attack ... Off the mark 10:10 failed on 10:15 and never surfaced. Samotlor was just doing its job cleanly, Gazprom-Yugra worked as a pear. The last break with Miskevich's attack gave a little hope for the future, 18:25.

The beginning of the second game is a continuation of the first, 1:5. But something has already begun to hatch. Ace Fialkowski - 5:7. The holes in the game of the Surgutyans continued to gap, but at least not all at once. The rival is also not iron and began to make mistakes, especially helped my marriage to serve. Dovgan shoots the libero with a serve - 17:18. Slobodyanyuk marked with a block, 18:18. We end up on a swing, 22:22. The exchange goes to 24:24, then Piun scores, and Fialkovsky does not beat the block. Our standard situation: finishing on the fourth meter, forced high pass to the fourth zone, where the gamers have natural difficulties.

In the third game, we were greatly helped by two doublets of aces performed by Miskevich - with 3:4 he leveled the balance, a pri 16:14 increased the advantage to 18:14. Between these shots, the game of the Surgutyans looked quite adult, marriage was reduced to one-time "shares". Not only Miskevich showed aggression on the serve, and only Nazar Litvinenko in the diagonal was good on the balls assigned to Samotlor, but the finish was already slipping. With the score 19:17 Makarenko shoots out, but the preview captures the touch of the block and the gap is reduced to a minimum, 19:18. Miskevich conducts the ending incendiary - at first he beat the block beautifully in tempo, and then played the emergency ball from the opponent's hands, 23:20. Immediately follows a block to Pozdnyakov and four set-balls, the second of which is realized by the same Pozdnyakov by serving to the net, 25:21.

In the fourth set, the mini-hit parade of marriage - Nikishin fails twice and Miskevich finds an out - again gives a handicap to the opponent, 5:9. Nizhnevartovsk keep their balance almost until the end, but we come to the final analysis in one break from the opponent. And he is "eaten", despite the excellent work of the Nizhnevartovsk team in defense, 21:21. Yakutin is distinguished by the ace in the libero, and another insidious serve in his performance brings a break point with Nikishin's attack, 23:21. The point is put by Shakhbanmirzayev, who has become familiar with the site, 25:22.

The fifth set is an absolutely equal game, which was slightly "leveled" by the judges. After the change of sides, Kostylenko compares the bill with a discount in the boiler, 8:8, but on video, the referees saw at least a controversial transition of the middle line - 7:9. Shakhbanmirzayev has finally played out, and Valentin Bezrukov on the other side of the grid bets on the first pace - 11:11, 13:13. The first match brings the referee's decision again: Kastylenka, taking out the ball, flew under the net out of bounds, incidentally hitting the tension cord - the arbitrators decided, that it is touching the net within the playing area. okay, Kirill immediately hammers the ball into the field powerfully, 14:14. Bezrukov continues to amaze in the center of the grid, over and over again providing rent through Piun and Tsepkov, Rukavishnikov acts more diversely, total - 18:18. Then again a controversial episode: attacks Pozdnyakov, the ball from the block hovers vertically above the net and Piun throws it almost vertically down. Our players and headquarters are outraged, seeing the game on the opponent's side, but in fairness, let's say, that the ball was exactly above the net and the central Samotlor played without error. The spent emotions did not bring benefit to the people of Surgut - Nikishin, moving the ball to the oblique diagonal, the ball touched the rope, from which he went out tangentially, 18:20. Samotlor won, but the language will not turn to call "Gazprom-Yugra" a loser. Yes, we still have many problems. But from weak-willed defeats we, it seems, resolutely refused. Let's fight - victories will come.