the mainclub newsGuys from our yard. We compose two Olympic teams from childhood 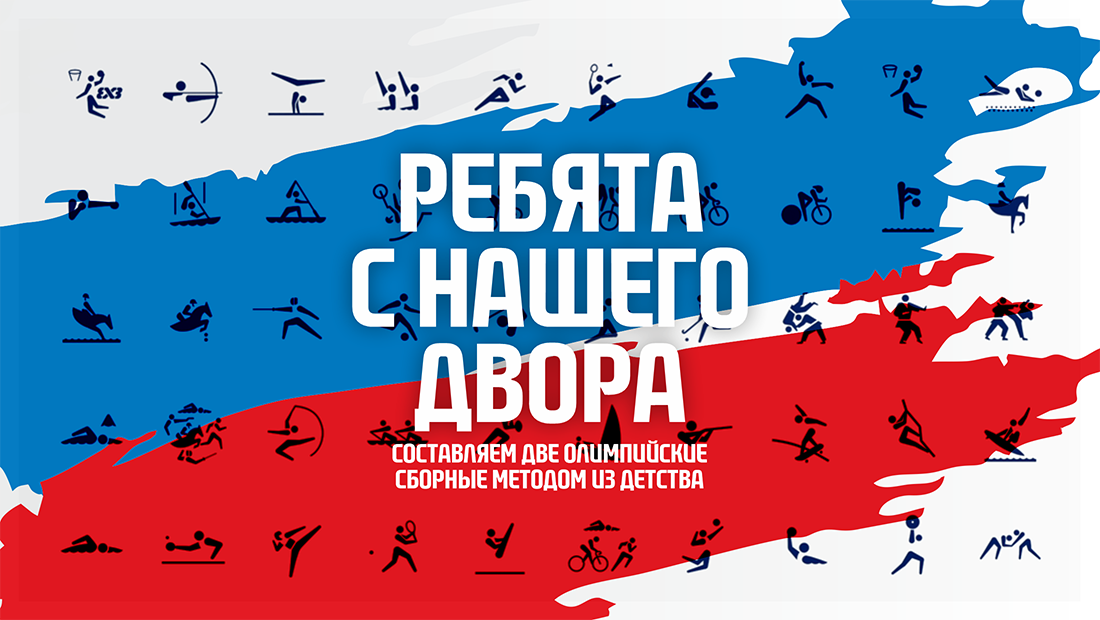 Guys from our yard. We compose two Olympic teams from childhood

The current nullification of reality opens up new possibilities: you just start constructing your own reality. And since she is your own, then the rules of the game may differ from generally accepted. What would happen now, do not share bats with your rich inner world with humanity? Candidates for the Russian national team would leave mostly for the seas and oceans, on vacation. And the coaching staff would begin to draw up the final lists - we’ll check these in the League of Nations, and these go to Tokyo ...

I remembered, as before, the children were divided into two teams in the yard, to play football. Usually, two captains alternately chose a player from the available forces. Why don't we apply this simple, but a truly “rating” method for determining two potential Olympic teams of Russia? And then evaluate them from. Suppose, we have Manager A (red team) and Manager B (blue team). For the sake of completeness, we will not disclose, who is behind them in reality, recall only, that the Olympic team is 12 man of all game roles.

Reds: Dmitry Musersky! It is pivotal, backbone player, hero of london. Can play in the center and in the diagonal, which is important for a truncated composition. practice shows, what is in good shape. Sure, it must be chosen immediately.

Blue: Egor Klyuka. Our everything is in a key position in the fourth zone. One of the best gamers in the world.. That case, when i'm even glad, that you chose Musersky and left me Kluk.

Reds: Viktor Poletaev! I immediately maximize the attack, while there is such an opportunity)).

Blue: Yes, you set the tasks ... There is a great temptation to pair up with Kluke Dmitry Volkov, but you can out of harm in the next round call Maxim Mikhailov and leave me without a diagonal. So let it be Mikhailov.

Reds: well then Dmitry Volkov, you yourself decided so. I definitely won’t give it to your Kluke.

Blue: Q.E.D.. I, perhaps, I'll take care of the center and take it to myself Ilyasa Kurkaeva.

Reds: why he, not the same Yakovlev?

Blue: I agree, they are quite comparable. The choice, rather, intuitive.

Reds: and you noticed, as we are in no hurry to choose binders? Nobody risks making the first move, because not sure, that the second will not be better)).

Blue: Yes, I agree, there is no pronounced leader among the ligaments, there is a set of players with their strengths and weaknesses. Here we are planning a tactical fight ... Well, whom do you choose?

Blue: not surprised. And then I - Yaroslav Podlesny. There is also a certain personnel shortage in the replay, and after the distribution of Kluki and Volkov, by and large, almost all the same, who will come second or third number. Nevertheless, there is some kind of choice and my personal casting has revealed a favorite in this key position.

Reds: Well, can, let’s go through the bundles? Although I will surprise you again and take Sergey Melkozerov.

Blue: not surprised again. Melkozerov has a great welcome, and where without him? Another thing, that he was just hatching, no international experience at all. You're risking. And in the meantime I feel, I'm losing initiative. I need reliability and experience! therefore – Artyom Volvich.

Reds: everything, it is necessary to solve the "ligamentous" gambit. I choose… Sergey Grankin! He and Poletaev will find a common language, and Musersky knows well, and Volkov loves a quick game. There are nuances, there is, but I compensate them, do not worry.

Blue: how did you start to choose first, you think so, that you go one step ahead. But not this time - I choose Igor Kobzar. And experience is already enough, and there are still plenty of forces. Also not without nuances, but also compensate, You will see.

Reds: how do you compensate them, if i take Alexandra Butko? A pair of Olympic champions is the same optimal balance.

Blue: Yes, except for, that they haven’t been eight years younger since London. Since you chose the binders, my hands are untied - you definitely don’t need a third. Listen, what about Cameho?

Red: remembered! Nothing so far. So he doesn’t participate - otherwise they would have chosen.

Blue: Denis Bogdan then. You need to block the oxygen with the game. But Bogdan, and in the "Fakel" along with Kluka and Volkov stood, and the team will look worse.

Red: to shut off oxygen with a game - a simple matter. The choice is really small ... Good, let it be Sergey Savin. When he is in order, he will yield to few. Another thing, that is prone to injury and is not always psychologically stable. But this, as they say, the details.

Blue: from the details the overall picture. After all, you need another dodigrovschik? I'll take it, perhaps, Denis Biryukov.

Reds: such a feeling, that you are not completing your team, and you look at mine more. I can do that too - you have a bust in the game, but someone needs to center. And i need. I wouldn’t miss it ... I’ll take Ilya Vlasova. Yes, yes, I know, that there are large and sometimes irreplaceable gaps. But there is still potential with the right approach, and huge. Will be working.

Blue: Yes, the center is needed. I then, perhaps, turn off Igor Filippov. I know, that he in “Zenith” lost the same competition to Safonov. But he has international experience., it is more important before the Olympics.

Reds: I personally need another gamer. I would take Anton Semyshev, but a player is needed for rotation, not for “gain experience and help somewhere”. Plus the reception to keep. therefore Alexander Markin.

Blue: I have to get my ligament and libero. Roman Martynyuk or Valentin Krotkov? Or, can, Alexander Yanutov? I will stop, perhaps, on Martynyuk. In aggregate, so to speak.

Reds: Yes, it's time to clean the tails. Diagonal and ligament closed, game plus or minus ... If Musersky insures Poletaeva, need someone else in the center. Or the second libero? Or is it still diagonal? Or someone in the fourth game? My choice is a doppler and a libero. Evgeny Andreev. Melkozerov in reception, Andreev - in defense.

Blue: thought for a long time and settled on Dmitry Kovalev. Kobzar needs to play a lot, to be in good shape. Kovalev is not so stable, but just cheer up the game, switch speeds he can. Plus great physics.

Reds: I went through the whole game - sad, girls. Nothing left, how to remember veterans. Yuri Berezhko. I think, what Savin, Markin and Berezhko will secure each other well. All, complete set.

Blue: can, play with one libero? Mikhailov needs insurance. Theoretically, a banner could catch Kluck, the good choice in replay is. Well fits into this scheme as well Pavel Kruglov. I'll take him. Complete set, but we have not decided on the coaches yet.

Reds: Tuomas Sammelvio. It's simple - the current national team coach. He has already made contact with someone, with someone he him, certainly, will establish. Specialist of the new formation, players like his approach.

Blue: Vladimir Alekno. Heavyweight Russian Volleyball, Olympic champion. Sammelvyuo - in contrast - too “light”. Our players sometimes need a more authoritative eye.. On the other hand, no matter what I say now, this is the only alternative. 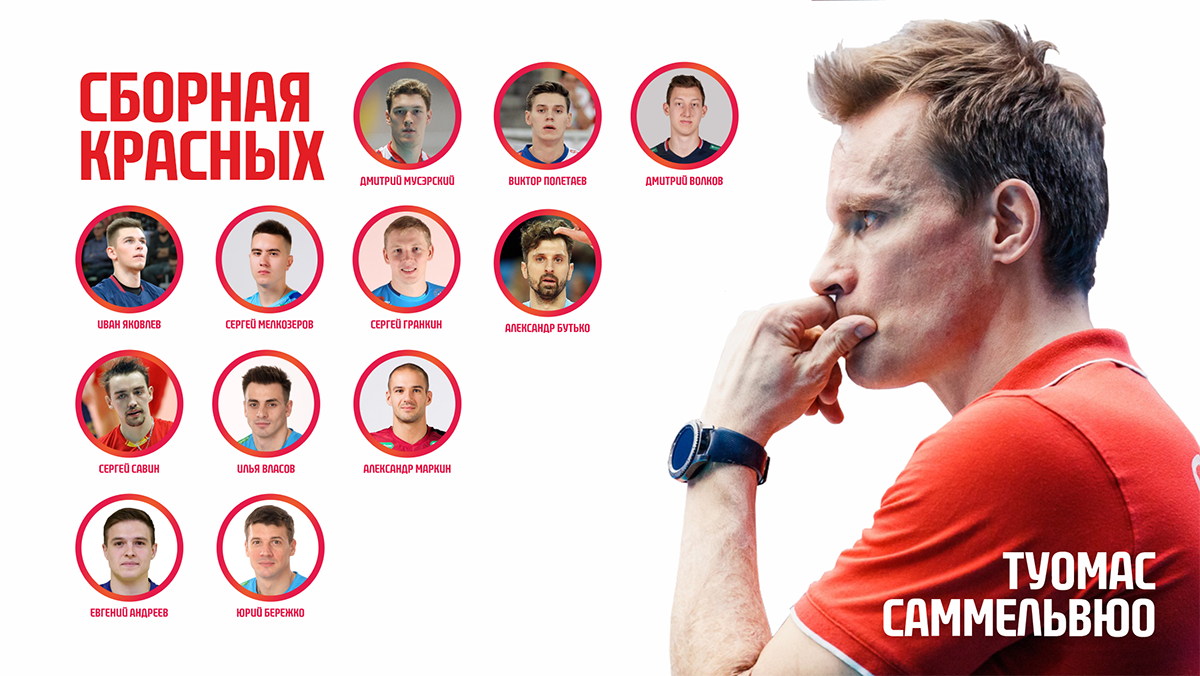 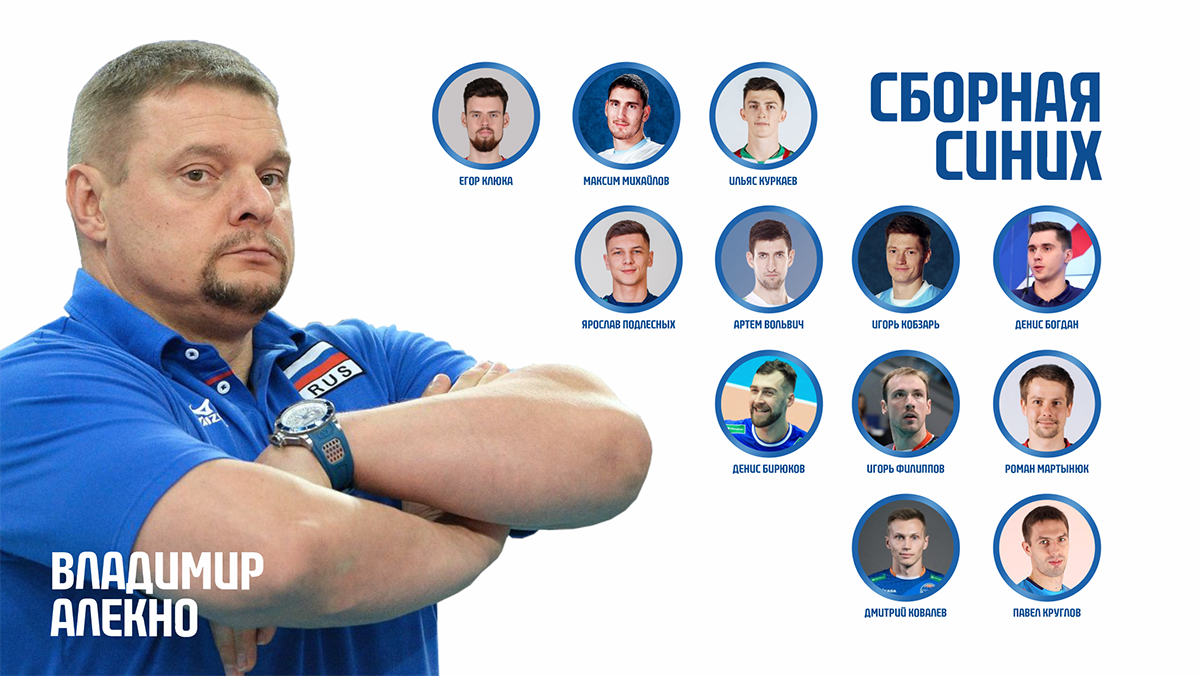 The reds have a soft spot - somewhere between the diagonal and the centers. Musersky is able to qualitatively replace Poletaev, but then the center is exposed. In fact, this problem was considered less evil, than insufficient depth in the game. Also worth noting is the full line of libero, where everyone is strong in his direction.

Blue just has libero - the least fortified position. She sacrificed reliability on all other fronts.: there are two full diagonal, good rotation in the center and aftergaming.

Which of these two teams would win? Here virtual reality is powerless, since in sports everything is actually decided exclusively on the site. But we clearly saw, what, basically, Russia is able to put two more or less equal Olympic teams. Wherein, of course, the level of competition in certain positions and especially the lack of a sufficient number of young talents in the foreseeable field of attraction are disappointing.