the mainclub newsWe work on the character 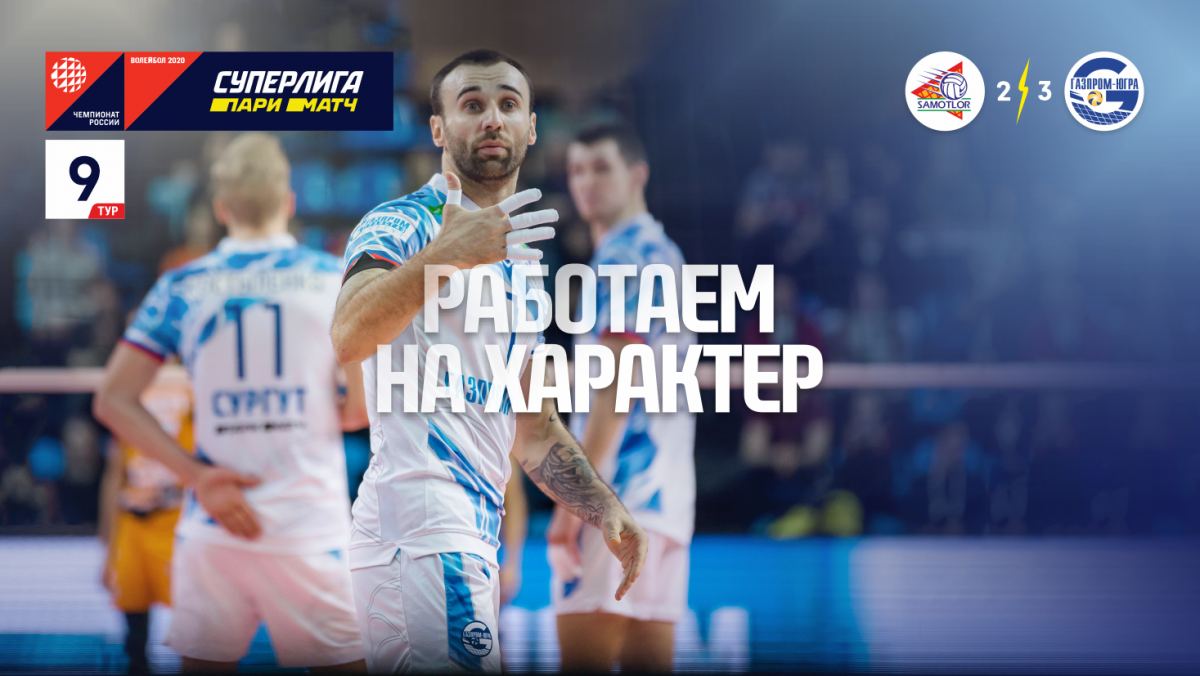 After these games have loyal fans have less power, than the players themselves. At least - emotional ... How is it in "Bushido" said? "This samurai happily goes to meet death, sweeping away all obstacles along the way ... ". Actually, I just came up with it myself. One minute after the match. Well, so what? Surgut in the fifth game when the score 6:10 They looked into the abyss, but then passed along the edge. so, still we wait and "posmetaem" obstacles.

And before the fifth set was the scenario, we have studied the fine on Wednesday, in the game with ASA.

In the first game did not go in the game was released as part of a double substitution Williams, and in general Surgut look seamless and balance: He scored his muse, Chereiskaya started harvest on the block, was useful Kastylenka. Ace Muse - 23:16, Ace Williams - 23:18, Chereiskaya - 24:19, Nikishin unit, 25:19.

In the second game the wind changed, the owners have organized themselves four goals breykovyh - Burtsev implemented doigrovku, and Asa laid Kovalik, Nikishyn and Papazov, 6:10. In the middle of the set is actively earned block Surgut, under it a row pleased Krivets, released instead tenacious and Nikishin, 14:15. Nevertheless, vartovchane kept minimum distance, and when after receiving downed Surgut scored in doigrovku Tsepkov, the owners have a certain comfort in the end, 18:21. Timeout "Gazprom-Ugra" - Chereiskaya removed and immediately closes the unit Papazova, 20:21. Another break in the performance of Surgut - Burtsev not cope with supply Kastylenka Schadilov and scores the ball rolling, 22:22. Comfort is no longer, He left the game in the nerves of steel.

begin swing, where the first two set-bola owners do not realize, Papazov then kick into touch prefers Surgut. But here everything was not right - Burtsev equalizes, 26:26. meets a muse, Pluzhnikov and steady hand in time to draw up an ace, 28:26.

The expense of the third party is growing again in favor of the hosts - gave excellent series Nikishin innings, sliding 2:2 on 6:2. Surgut slowly begin to catch up - Pluzhnikov knocks from receiving Burtsev, 8:10. But the muse hits into touch, and the last round Nikishin again earns ace, 9:13. Another spurt guests - Chereiskaya unit closes the sky, 11:13.

It seems to be planned is another which is equal to the ending, Surgut but dramatically slow down on the pitch Burtsev - to withdraw from the downed reception does not work, and the owners of three consecutive unbeaten in the fourth zone Nikishin, 14:20. understanding, Seth missed, Rafael Habibullin changes doigrovschikov and diagonal, giving them time to rest, but the long holiday did not happen, 18:25.

Then there was a party of equal games and video views. The first Challenge Powerful happened at the score 12:12, when the end of a protracted two-edged draw Burtsev struck out. The judge several times changed the decision, two opposite view was taken, last, eventually, recorded a net touch at Chereiskaya, 12:13. Artem Habibullin beautifully knocks, and then closes unit Burtceva, 15:15. View captures blow Burtsev in offsite, 16:17, and already in the next drawing technique helps detect the block touch after Schadilova attack, 17:17.

But when Krivets sends out completely the winning ball rolling, Video powerless - 20:18. The "Gazprom-Ugra" formed a small handicap before the ending, but with enviable persistence eliminates Nikishin and fear "Yugra-Samotlor". Two draws doigrovschik attacks five times - all in a block, but twice the ball from the hands of Surgut still flies out to shallow, 20:20. Kastylenka finally removed, Muse and puts a little over the field, 21:21.

Decoupling rolls rapidly - Chereiskaya, diverting the ball on the block, gets into touch, Nikishin and draws another ace, 21:23. Then Schadilov not cope with the reception and Burtsev in doigrovku brings his team to set-ball, 21:24. As a result - 22:25 and strong-willed tiebreak by owners.

In the deciding set psychological superiority on their side, although Surgut hands, head and cling to the entertainment experience through the last effort, 5:5. But unstoppable Burtsev, and Cosmin, It is in a better position, Schadilova passing the ball on the grid, 5:8. After the change of sides Papazov emboss receiving Galimova, which immediately changes Kastylenka. Schadilov receives and scores, 6:9. Habibullin feeds into the grid, 6:10.

Moment of truth. Schadilov in alignment with diagonal stitches in the fourth zone unit, 7:10. And there comes a time Muzaya - remember, Maciej spoken, that the Russian Super League makes men out of boys. here you go, this is a man's job - to drag the team in the end of the fifth set. Pole three times accurate, Pluzhnikov and in the appendage manages to feed in the cable with a roll - hardly vartovchane it fishes, Chereiskaya and merciless in doigrovku, 11:11.

Isolation no less swift, than in the fourth installment - only in the opposite direction. The hero of the previous endings Nikishin hit out of bounds, 12:11. Kastylenka unit closes Papazova, 13:11. frustrated diagonal, who played the match at a high level, He hits out at, 14:11. Pluzhnikov wrong on the pitch, a point in a thriller naturally puts Muse, vkolachivaya ball into the area, 15:12.

From the standpoint of the volleyball match went contradictory - both teams played in waves, allowing many successful error. If, however, refers to the game as a spectacle, The match turned out colorful and exhausting, vivid and dramatic, memorable. Extremely important, that "Gazprom-Ugra" has managed to win after the defeat of ASA, - it is important for the standings, and psychological state of the team. Over the past week our team, may be, somewhere and unfinished, ceded, I was not able to put the squeeze on a rival in those or other moments. But the team received invaluable experience, experience of the very walk a tightrope. maybe, he instilled in our children a kind of samurai spirit and the iron certainty, that can play a decisive importance in the future. 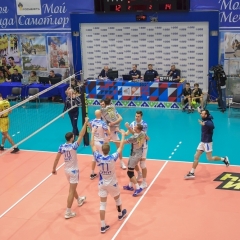 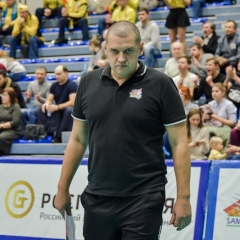 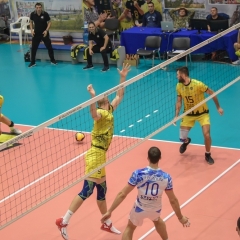 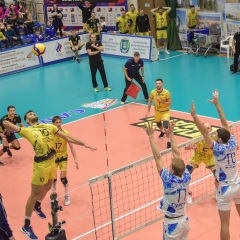 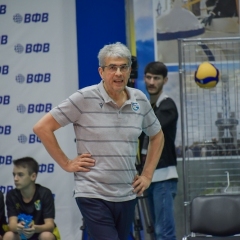 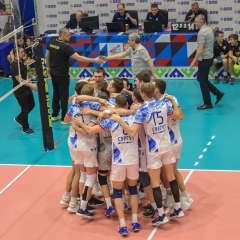 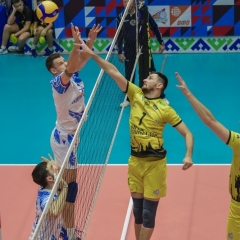 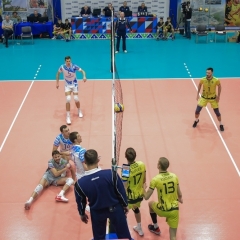 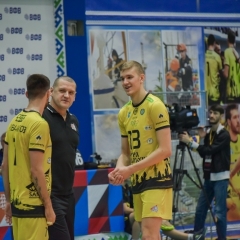 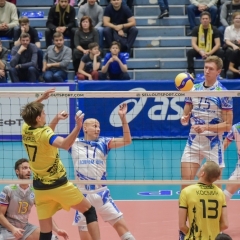