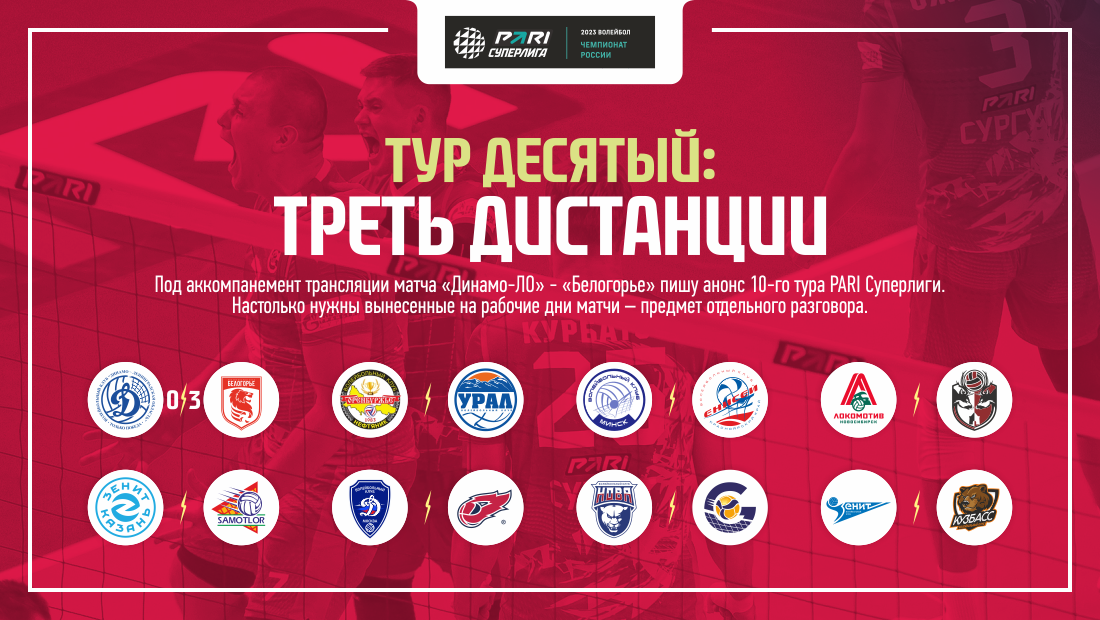 To the accompaniment of the Dynamo-LO match broadcast – Belogorye is writing the announcement of the 10th round of the PARI Superleague. So much needed are matches made on weekdays - the subject of a separate discussion. As for me, they do little in terms of marketing and attracting fans, and what are the bonuses for playing teams, god knows. Let's go back to the anniversary tour - quietly a third of the distance of the smooth championship is almost passed! Links to start-up costs no longer work, everyone is trying to thresh at full strength. Harvest in volleyball, of course, in the spring they count, but its foundation is laid here and now.

Sometimes matches endure not just for a couple of days, and immediately - from the second round to the first! Kazan will play with Vartovites 1 and 2 December by mutual agreement. Translated into Russian, this is called - we do not believe, that we can beat Kazan. Well so be it. Despite fierce domestic resistance to Lokomotiv, nearly won, Nizhnevartovtsy is unlikely to do something similar in Kazan. At first, if every match "Samotlor" gave out at such a level, would take another place. Secondly, the factor of native walls disappears (what was it exchanged for, moving the home game to Kazan?). Thirdly, Kazanians are not the right opponent, which will allow you to roam. Unlike the wounded "Loco", everything is in order here, and a serious attitude towards the opponent after the battle with Novosibirsk is guaranteed. Aleksey Verbov will start as a base, and there - how will it go.

The hosts have a chance if they don't win, then at least bite the opponent. The stars may align this way, that Evgeny Rybakov will not bite, Roman Potaluk will not save (eg, will hit on outs), Feoktistov will not have a Beckham day, and the Iranian and the Argentine will miss their homeland. "Oilman" must be ready to take advantage of the slightest weakness of the Ufa residents. If the "Ural" is in order, he is the clear favorite.

"Dynamo" is in order and on the battle track, "Torch" chills after Novy Urengoy. A statement of the banal - if Muscovites have a serve (and she almost always flies with them plus or minus), then this is a deliberate handicap, which Dynamo will gladly bring to victory. The Torch has such a feeling, that the transition to adult volleyball was delayed for a large group of young talents. They play unstable, hence the wavelike result, which even Sergey Grankin cannot influence with his programs. What else can affect Grankin, science is unknown. But an experienced setter will definitely tune in to Dynamo as if it were his own.

They say (alone, Unfortunately, did not see), that Minskers made some noise in Sosnovy Bor. This is great news, unless it is a consequence of the relaxation of the owners. hope, that "noise" will result in something more significant. Although the "Yenisei", of course, almost perfect opportunity to lick the last wounds, and experienced fighters from Krasnoyarsk will try to take advantage of it. So, there will be no underestimation of the opponent. The more interesting, what will happen on site, for the "Yenisei" does not look indestructible, and the "Builder" gets rid of the title of whipping boys.

After a cold shower in Nizhnevartovsk, Lokomotiv will be extremely cautious with uncompromising ASK. Konstantinov will shake up the bins and present all the best at the moment. At the same time, the owners risk being left not only without Abaev, what have you adapted to?, but without Kurkaev. "Our" Denis Chereisky, of course, good, but still Lokomotiv may not have that overwhelming superiority in the center of the grid. Together with the uncertainty with the main diagonal and the shaky situation in the rematch, this gives Nizhny Novgorod certain hopes. And here are the questions to ASK: is Antonov ready to drag, is Zheleznyakov waiting for a chance, what's in the game, etc.. Titich and Nikonenko, of course, overexperienced craftsmen, can ignite the team in separate episodes, but others should pull the whole match.

maybe, Kemerovo residents are ready for resistance, but not ready to win in St. Petersburg. Even without Poletaev, Zenit will take, what is called, on class. Anderson in diagonal for now (or already?) not a storyteller, but a very good option., and Klyuka and Voronkov cope quite well in the replay. What else to add? I want sensations and pepper, so I will say, that "Kuzbass" can win just because, that is not prepared to win. Playing loose volleyball, Klets and a well-qualified Ko can take a set. Good, two. Let's write it down and hope for spectacular volleyball.

Weather forecast for the 10th round

Kirill Kostylenko leaves Surgut
The most "native" club for Surgut, which must be played
Last news