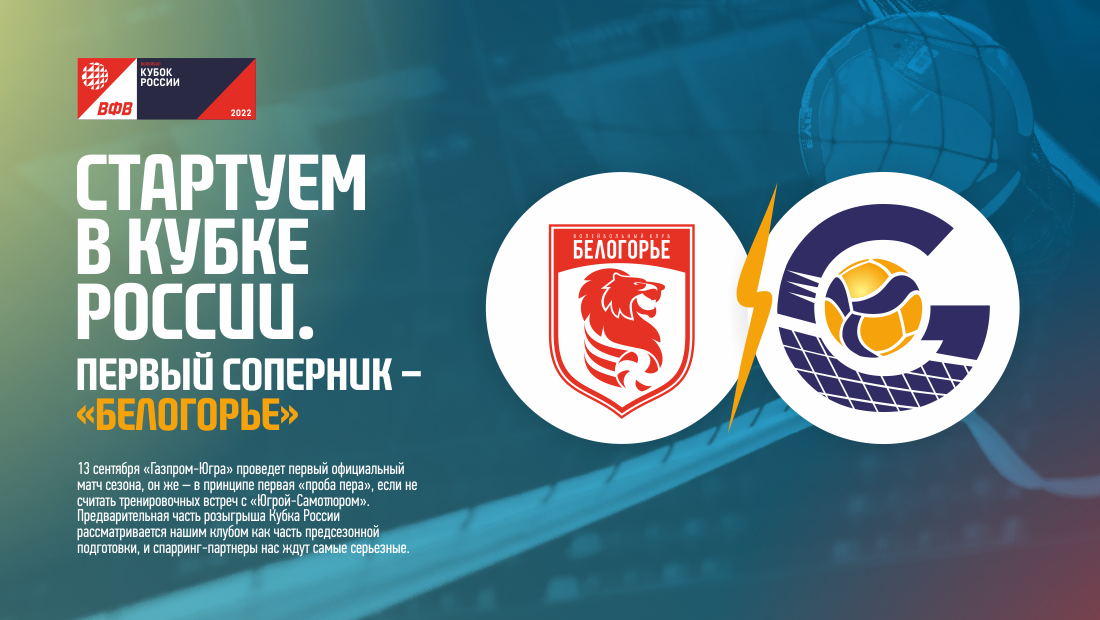 13 September Gazprom-Ugra will play the first official match of the season, he is, in principle, the first "test of the pen", except for training meetings with "Ugra-Samotlor". The preliminary part of the Cup of Russia is considered by our club as part of the pre-season preparation, and sparring partners we are waiting for the most serious.

At first, is a 10-time and current owner of the Russian Cup "Zenit-Kazan", secondly - the eight-time winner of the trophy Belgorod "Belogorye". Third, the unknown (because the composition has changed a lot) In the penultimate round of the smooth part of the national championship, Gazprom-Ugra goes to visit the team. The first meeting in Kazan with Belogorye, so today we will try to introduce you a little closer to this version team 2022-2023 years.

Not a secret, that the famous club is going through a period of generational change - the team went through the "pit" of this process a couple of seasons ago, and is clearly on the rise.. Belogorye can boast of an elite legionnaire that is rare today in the diagonal position - Moroccan Mohamed Al-Khachdadi will most likely again be among the main contenders for the title of the most productive player in the Super League. Well, to help him, Peter was discharged "forever the second", but not in terms of game, Ivan Porebinkin. In another club, Ivan would play first violin, but Belogorye is so ambitious, that can afford to keep him number two.

Roman Poroshin came from Kazan to Belgorod, who was happy with everything at Zenith, except for playing time. Ambitious setter did not want to sit behind Mike Christenson for another year, and in "Belogorye" he is guaranteed the first violin or even a conductor's baton. His replacement is the highly experienced Igor Kolodinsky, whose sports biography is firmly connected with Belgorod.

Another key player of Belogorye is the son of Sergei Tetyukhin Pavel, in just a couple of years, he managed to become an indispensable all-rounder in the position of an after-player. by the way, Poroshin and Tetyukhin were not supposed to take part in the upcoming tournament, because they were called up to the Russian national team. However, both returned ahead of schedule to the club to the delight of the management, to coaches and partners - Belogorye will play in Kazan in full force.

In the off-season, our first opponent, in principle, pretty much shook up the line-up. Experienced Sergey Chervyakov appeared in the center of the net, attracted to the national team Igor Filippov and promising Yuri Tsepkov. Given the talented and tall (219 cm) Georgy Zabolotnikov, this line looks more than reliable. Belgorod invited Ruslan Galimov, who shot last season, to play-off, Ilya Sdobets finally recovered from a serious injury, the powerful Stanislav Masliev remained in the club. Any of them is able to pair up with Tetyukhin, whose place in the starting line-up, in the presence of the necessary conditions, is hardly in doubt.

On the libero position - a very impressive pair: Roman Bragin and Valentin Krotkov, capable of both a stable game in reception, as well as on feats in defense. In general, the current composition of Belogorye, managed by the most experienced Boris Kolchin, capable of much. In the championship, in our humble opinion, the team is in the top 5 clubs, and in our cup group, undoubtedly, will try to catch Zenit-Kazan (block on Ropavka, that the hosts will play without Christenson).

Our task in the match with Belogorye is to evaluate our own potential against the background of a more powerful opponent, look at game combinations and connections. It will be interesting to see, how our new setter Vsevolod Abramychev will look like in the game with his “alma mater”, transferred to us from "Belogorye". From a tournament point of view, the next game will be much more important - with Neftyanik, We'll talk more about this team later..

"Gazprom-Ugra" dressed up
From ship to ball: dance with perspective
Last news