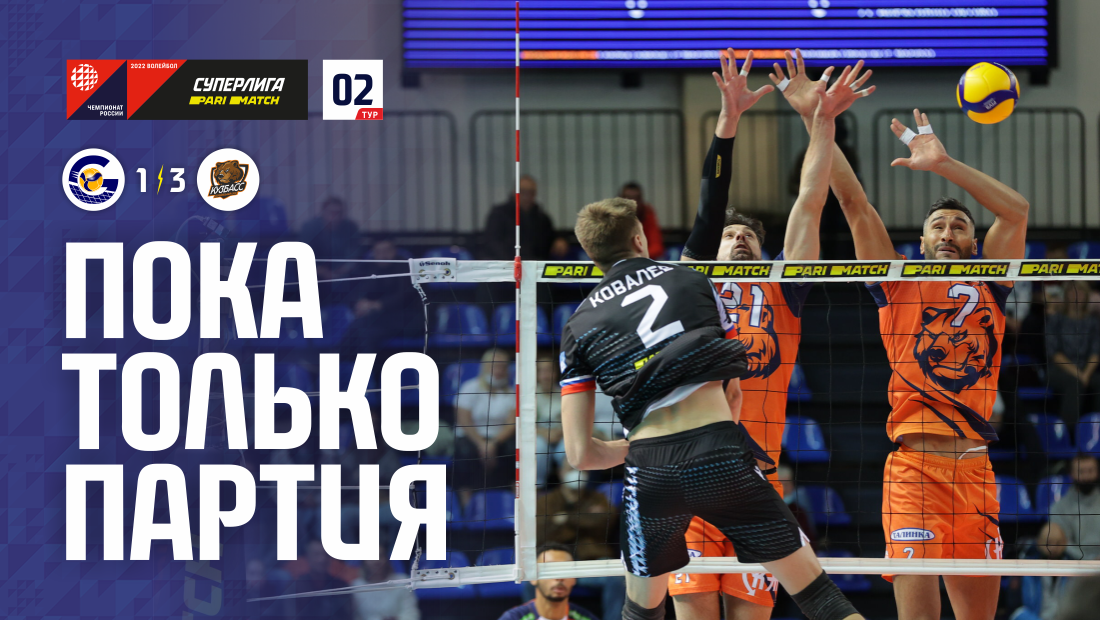 So far only a party

In the first home match, Gazprom-Yugra lost to Kuzbass 1:3. Kemerovo residents left their debut on Alan's serves, 0:3. The Brazilian diagonal with the help of Alexander Butko chalked up almost all the points of Kemerovo to the mark, when Artem Dovgan by ace reduced the gap to two break balls, 8:10. Ace Alexander Okolich in the libero of "Kuzbass" Turdumamatov established parity, 13:13. 19-summer protector of guests, forced to appear on the site due to injuries of Moiseev and Obmochaev (the first did not come to Surgut, and the second was warming up with a bandaged knee), predictably became a weak link in reception.

Alan continued to light up in the attack at Kuzbass, and Kovalev's unprepared pipe buried itself in the block, 14:17. Nikita Alekseev shoots out, but video viewing captures the touch of the block - and the score keeps the chances for the owners, 17:18. Immediately, the feed flies to Turdumamatov, 18:18. The ending unfolds from the mark 21:21 - Kovalev scores from the block on a high ball, Nikishin, who went to the front line, watched the block for Butko's discount, and Kovalev confidently ends the set with two aces, 25:21.

In the second set, a mirror picture - the people of Surgut go forward, 11:7, and the residents of Kemerovo rush in pursuit. Obmochaev helps the team to receive, Pakshin successfully replaces Sivozhelez, played out by Karpukhov, and Rukavishnikov loses points in attempts to establish a relationship with Okolich, 12:12. Alan adds his firepower to the Kuzbass outplayers, and for Surgutyans, successful actions are interspersed with mistakes, this is enough for the final 21:25 on the board.

At the beginning of the third set, the hosts let go of the opponent again, 2:5, and try to repeat the script of the first batch. Almost succeeds - Karpukhov's bloc fixes parity 13:13, but video viewing returns a point to "Kuzbass", because the ball from the block has touched the antenna. Immediately, the more concentrated game of Kemerovo residents bears fruit, 14:18 after Alan's next attack. His counterpart Alekseev scores every other time, Kovalev is good at the net, but disrupts the reception of the glider specially released for this purpose by Shyenshchikov, 17:22. Serving error and Makarenko stuck in the fourth zone complete the case, 18:25.

In the fourth game, the Kuzbass sideplayers proved to be excellent., and Shakhbanmirzaev came out unsuccessfully for Surgutyans, gave way to Alekseev when counting 6:9. Block finally grabbed Alan, another ace succeeds Kovalev - and the opponent is within easy reach, 10:11. But Pakshin is good again, Alekseev in the block, and a microscopic touch of the lower cable from Nikishin in a torn out hardest rally shifts 13:15 on 12:16. Nevertheless, residents of Surgut find the strength to pull themselves up in the score again - Okolich scores, and Kovalev puts two aces in a row, 20:21. But that's all, what the owners managed to achieve, the ending is worked out by Karpukhov, and Pakshin puts a full stop, 20:25.

Mikhail Shcherbakov, captain of VK "Kuzbass" (Kemerovo): The opposing team has been updated, new people arrived, the mood was different, not like in the Cup. Other emotions, more fans. I think, the guys from Surgut will still show their character and bite their rivals. We're showing autumn volleyball for now, there are regular failures - a new binder, need to get used to it. Today we got out at the expense of character, motivation, desires to win.

Igor Juricic, head coach of VK "Kuzbass" (Kemerovo): Each team is looking for their own style at the beginning of the season. We arrived after defeat with the thought of winning, but it was not easy. I am pleased with the reaction of the team after losing the first set. We are writing a new history of Kuzbass and we must endure, work, add from match to match.

Anton Malyshev, head coach of the EC "Gazprom-Ugra" (Surgut): We add from game to game, but it's still not enough. We're still unstable, we are losing endings, and we lose on our own mistakes, to themselves. This makes the game. The first batch was taken at the expense of their built game, which we practice in training. Later we were knocked out of the reception, we slackened our serve and made many unforced mistakes. Emotional mood went down and all this together made the difference in the score.

P.S. Unfortunately, after the game you have to be distracted by the topic, far from volleyball. In the TV commentary on the match, information was provided, offending our guests, volleyball club "Kuzbass". Rafael Talgatovich Khabibullin on his own behalf and on behalf of VC "Gazprom-Yugra" apologizes to the players, to the coaching staff and the management of the VK "Kuzbass". Surgut and Kemerovo have always had the kindest and most friendly relations., both regions represent labor, industrial regions of the country, where people understand the value of a word. Rafael Habibullin promised, that such statements will never be repeated, and expressed hope, that the incident will not harm our relationship. An appropriate conversation will be held with the commentator of the match.