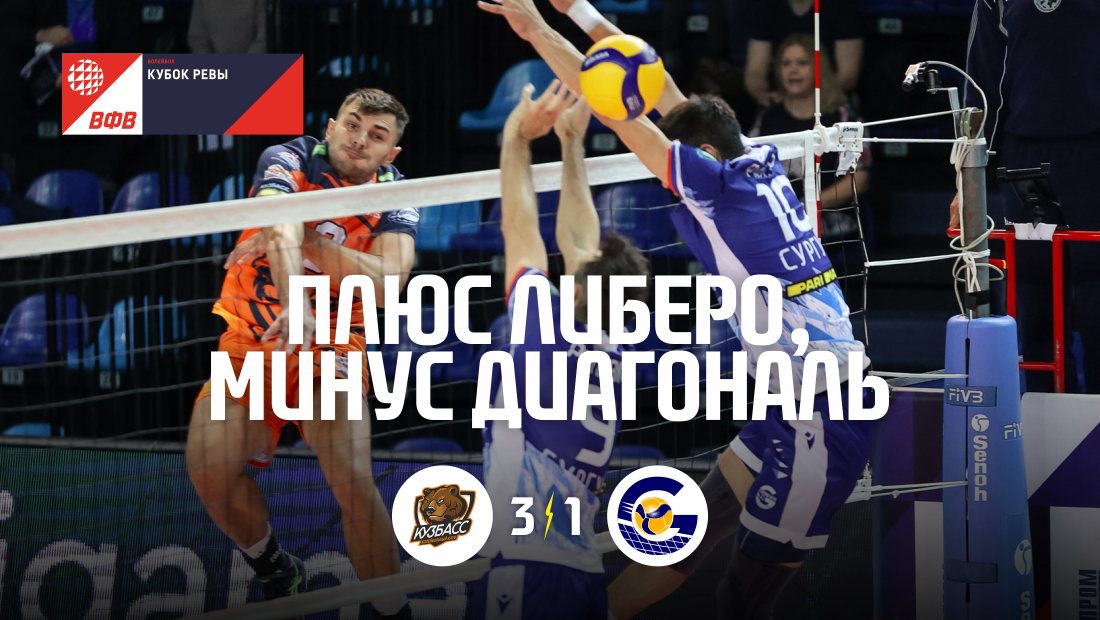 Plus libero, minus the diagonal

The fate of the first set of the match against Kuzbass was decided in the opening - 0:5 and woo a la. Cannot be said, that the people of Surgut just failed, but the lack of aggression on the grid was successfully used by the Kemerovo team in their favor. Further it was enough for "Kuzbass" to keep the distance, what they did: a good reception performed by Gazprom-Yugra and the seemingly well-established game from the fourth zone was “compensated” by the diagonal that fell out of the game, what against the background of self-confident Alan, Sivozhelez and Karpukhov were clearly not enough for the chase, 18:25.

The second set went according to a different scenario - the Surgut team did not let the opponent go on time at the start, imposed a fight and took the lead on powerful serves of Yegor Yakutin - with 6:8 on 10:8. In swing mode, the game reached the endgame, where Gazprom-Ugra formed its first set-ball - 24:23 after feeding Pakshin into the net. Block made Karpukhov almost believe in victory, but Kemerovo residents miraculously saved the ball, and the same Pakshin successfully risked from the back line, 24:24. Then, once again, the option in the person of Shakhbanmirzaev did not work., and the reply from Karpukhov was not so effective, how effective - a neat block-out, 24:25. The decisive point was won by Kuzbass with a block on Makarenko, 25:27.

This defeat angered our team - and in the third game the game went according to the principle of "tear and throw". Slash with your foot (!) catches a rebound after hitting Alan, and then knocks out an ace - 5:3. Another rally with excellent protection in both directions - and Alan is blocked by a block, 6:3. Shakhbanmirzayev works out twice in one episode in defense, and Nikishin wins back from the edge of the block, 8:3. Ace Nikishin, 10:5. Surgutyans, what is called, flew: and dense feed, and protection, and confident attack. Another ace Nikishin recorded on the scoreboard 20:11, and the set as a whole showed, that proper concentration at a certain level works wonders, Kuzbass had nothing to oppose to our team, 25:14. Separately and especially, I would like to note the game of the libero of Nikita Eremin, who cemented the reception and did an excellent job in defense.

It was only partially possible to transfer what was created by the set earlier to the fourth game.. The leitmotif of the match came out again - we, in fact, play without diagonal. And Rajab, and Nikita Alekseev (judging by past games) not at all like ourselves. This is our unclosed option, and today - a gaping hole, through which unplanned glasses fly away. Shakhbanmirzaev's three mistakes in the attack did not compensate for his ace, 5:8. Ropavka, who got the move, slowed down, the reception just floated, and Kuzbass felt the air, which immediately pumped up the lungs. The point was put by the one who came out under the curtain instead of Alan Papazov, 19:25.

In this match, the Surgutyans had chances to catch on due to the progressing play in the fourth zone, erupting from time to time and, what, probably, the most important thing at this stage is a well-established reception and tenacious play in defense and safety net. Any game is built on the basis of reception and this basis began to appear in our country. It remains to build on the attack and the main problem is here, repeat, diagonal not working at all. Let's hope, that this is a temporary phenomenon and the guys will catch up.

Already better, but not good yet
The cup is not ours: results of preparation
Last news