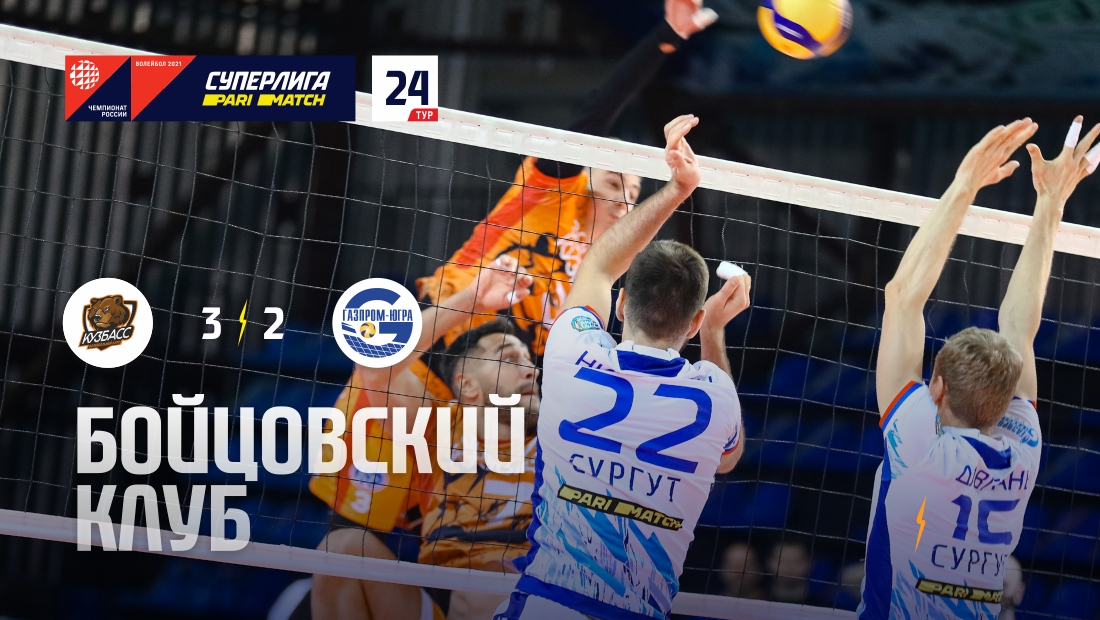 The match in Kemerovo turned out to be the most interesting, with good prospects and certainly with an excellent assessment of "Gazprom-Yugra" in the "desire to win" column. Igor Kobzar, who fell ill, fell out of the fighting staff of the owners, but Yegor Krechetov, who replaced him, did not spoil the mass of his attackers, besides, delivering a lot of trouble to the people of Surgut with their glider whistling over the cable.

The debut set was held in an absolutely equal fight. Even two successive aces of Ivan Zaitsev (4:6) did not become a springboard for the owners - at the mark 10:10 the people of Surgut grabbed the Kuzbass with a stranglehold and dragged the game to 22:22. Zaitsev starred, and Karpukhov at the decisive moment shot an ace at Chanchikov, providing Kuzbass with two set-balls. The first screwed up the same Karpukhov, by attacking with a pipe into the block, and the minimal superiority of the owners was legalized by Krsmanovich, 23:25.

In the second batch, Gazprom-Yugra came under powerful pressure from Kuzbass to serve, the reverse side of which was the crumbling reception. It all started with the optional "rescue" of the outgoing serve from Shcherbakov (3:7), continued with ace Karpukhov (5:13) and the exit of Glivenko instead of Zaitsev at the mark 8:17. All attempts by Surgutyans to return to the game led to unjustified risk, and the set was given long before its completion, 15:25.

In the third game, the residents of Surgut were noticeably angry - first of all, on ourselves. Chereisky shoots ace, 2:0. Ace from Shakhbanmirzaev, 4:1. But the attack of Zaitsev and two chaotic rallies with the use of the cable start the game on the balance, 7:7. All, fizzled out? Not at all - Nikishin, became the best in the squad of Surgut, writes out two aces in a row, 10:7. Chanchikov saves the ball in the insurance, but Rajab hits without a block out, another break mines Karpukhov, 10:10. Well, starting from the beginning: Rukavishnikov with a discount on the head in an empty zone turns the problem into a point, long rally ends with a block to Karpukhov, 15:12.

The owners do not give up - the most active in their lineup, Anton Karpukhov, is discharged with another ace, 16:16. But in our fourth zone Nikishin is unstoppable, 20:18. Fialkovsky goes to serve and is delayed: Dovgan recoups from the block, and Zaitsev does not put the ball in line, 22:18. We got the set-ball after Shakhbanmirzaev's attack, 24:20, but implemented through the attack of a trouble-free Nikishin, 25:21.

The fourth set was the decoration of the match. The teams took turns going forward, but no one could get an advantage of even two points. Nikishin raged among the Surgutyans again, and Rukavishnikov in time shifted the emphasis to the central, and then he himself closed Markin's attack on a challenge ball with a single block, 17:15. Krechetov evenly loaded all his masters, and ace himself for the first time secured a two-goal advantage, 18:20. Surgut residents immediately pulled themselves up, 20:20, and the finishing chop began. Karpukhov hits out, the judges record the touch of the block, but video viewing does not confirm this decision, 22:22. Krsmanovich wins back from the block, and Nikishin hammers an emergency ball under his skin on a triple block and takes Gazprom-Yugra away from Zaitsev's innings, 23:23. He also brings the first set-ball, 24:23, which, through the efforts of Krsmanovich, turns into a match-ball for the hosts, 24:25. The people of Surgut recoup and, on the third attempt, gain victory through the efforts of Chereisky, 28:26!

Fifth set - lottery. The known fact was confirmed this time too.. On powerful serves Zaitsev "Kuzbass" moves from 5:5 on 5:8, then small outs in the rebound from the block decide everything, touching the net and hitting past the blocking fingers - 7:12. Wire feed (bad luck too!) pushes Kostylenko under the block, and Fialkovsky, who came out for the last risk, sends the ball into the net, 9:15. That case, when you can leave the site with your head held high - Gazprom-Yugra has done everything, that could, and lost to one of the leaders of the championship in an equal fight, showing outstanding fighting qualities.