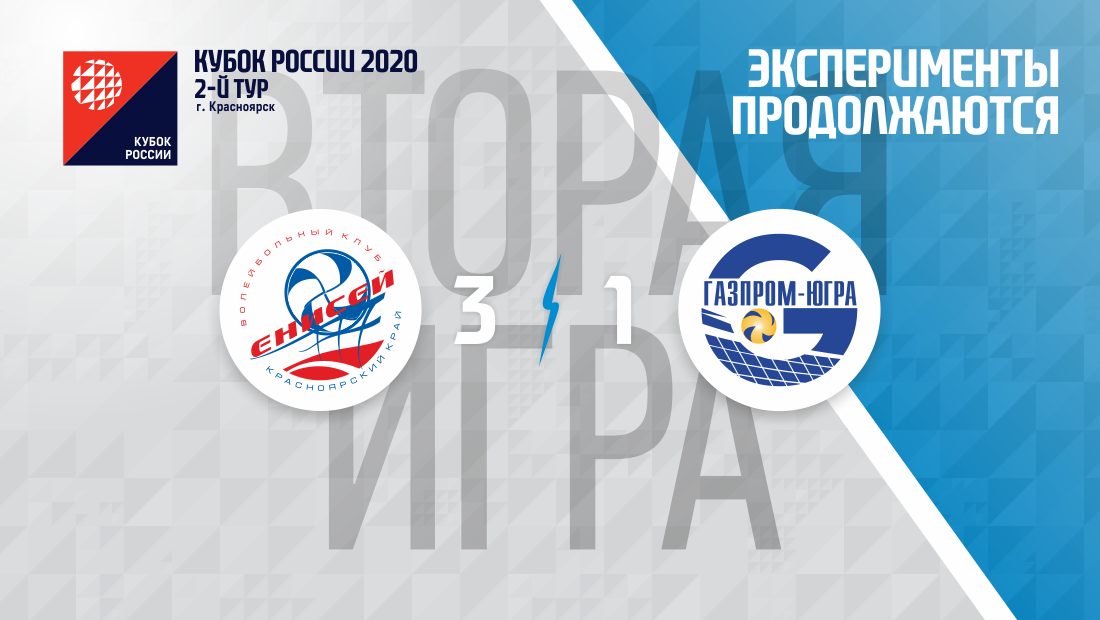 Gazprom-Yugra entered the game with Yenisei in a highly experimental lineup: Akhaminov-Shahbanmirzaev, Chereisky-Dovgan, Fialkovsky-Slobodyanyuk. Wide rotation led to fiasco in the first set: first, Slobodyanyuk swam on the powerful feeds of Skrimov, and then, by inertia, we stopped coping with Todor's very simple feeds. Account with 4:7 flew away to 4:13 and the fight ended there, 15:25.

In the second game, Surgutyans even took the lead after Ace Slobodyanyuk, 11:10. When Scrimov knocked out another ace (14:15), Kostylenko quickly went to the back line and provided an excellent reception, 15:15. Akhaminov's two mistakes (pass by Chereysky and discount to touch, 16:18) led to the exit to the Rukavishnikov site, which has become one of the key factors in maintaining a stable game. Krasnoyarsk residents, Nevertheless, there were good chances to put the squeeze on the set (22:19, 23:21), but his own marriage fell down - Scrimov hits out, Ereschenko flies into the net and does not lay the ball along the line. Surgut residents got hold of the first setball (25:23), but implemented only the fifth, 31:29. I will note, what worked there, where it usually does not work - in the fourth zone. Slobodyanyuk scored a couple of emergency goals first, and the last two points were brought by Fialkovsky.

The potential difference of the playing line-ups was obvious - only the diagonal Klets did not play for Yenisei from the main six, who was replaced by our well-known Aksyutin. So the question was: will Gazprom-Yugra have enough character and enthusiasm?, to continue the equal fight? Not enough - in the third set again failure, 11:17. The interaction between Akhaminov and Shakhbanmirzaev did not work out: the advantage of our diagonal in speed, he very quickly enters the shock position, and the setter over and over again overestimated the transmission - it was necessary to slow down, adjust, losing all their trump cards along the way. The result is natural, again 15:25.

In the fourth game, we again saw Ace Scrimov and Kostylenko's reception, only the account was already 5:9. Shakhbanmirzaev continued to pick out balls from behind his head and at the mark 8:12 Rukavishnikov again took over the threads of the game. However, at first there was nothing to take: chronic problems in admission continued with confusion on the grid, 10:16. With the score 13:17 Scrimov was replaced by Piskarev and immediately received a non-tackling glider from Fialkovsky, 15:17.

There was a chance to get hooked on the game, but in the end, Yenisei confidently tumbled in, Yan Ereschenko on the net was almost flawless, 17:20. Pipe performed by him and, it seems, It is done, 19:23. Video replay fixes the touch of the block during Shakhbanmirzaev's attack, the diagonal immediately knocks out an ace to celebrate and "Enisey" goes to an emergency time-out when counting 21:23. Piskarev takes off and brings three match balls at once, which Gazprom-Ugra suddenly wins back: Fialkovsky and Slobodyanyuk score, and Kritsky smears past the site, 24:24. However, the fifth set only flashed in the thoughts of the Surgutyans - the fourth zone stopped "cooking", 24:26.

A broad scan of the reserve revealed, that Akhaminov at least not played with partners, Slobodyanyuk is not bad on the net, but weak in reception, Fialkovsky explodes sporadically, Shakhbanmirzayev is not "built in" ..., this is normal. Alarming only, that our nominal first squad has not yet gone too far from the reserve in terms of the quality of play.