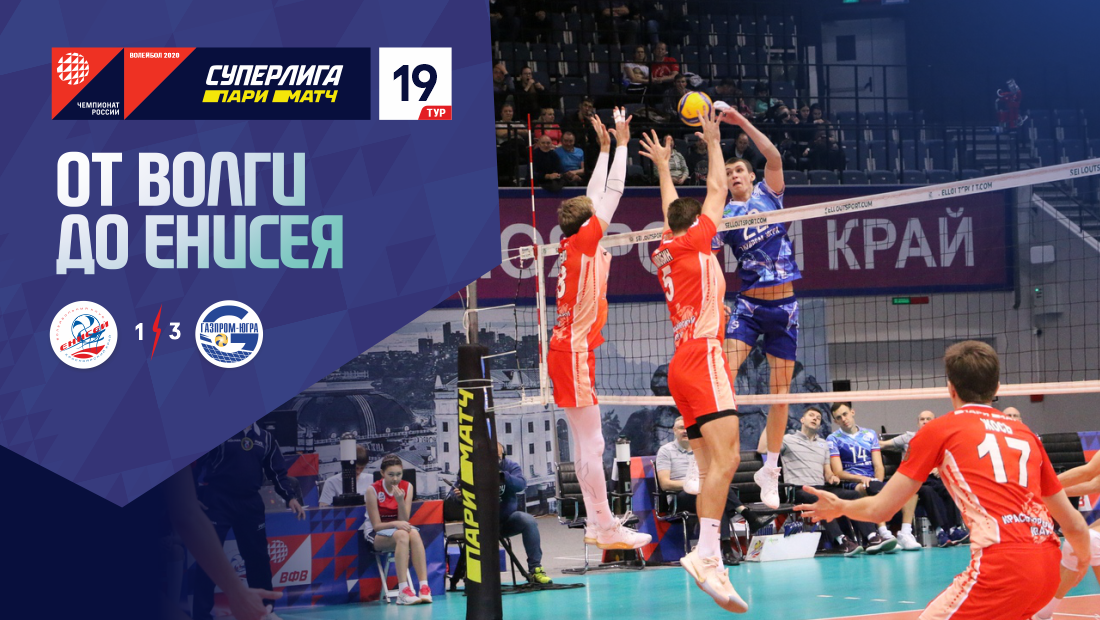 From the Volga to the Yenisei

Surgut extracted Krasnoyarsk important victory. The degree of importance will be clear later, but in any case, "Gazprom-Ugra" remains in the fight for the playoffs - and this is by far the most important. Gently shifting from the Volga to the Yenisei margin obtained in the match with ASA Knowledge, Our guys started playing sverhakkuratno and disciplined. Victim in the reception was Jan Ereschenko selected, who does not like gliders - and it paid dividends.

In the debut of the guests gradually, one breaks ochke, pushed forward themselves a comfortable base for the ending. Ace Chereiskaya - and we go forward, 5:4. Excellent power supply Dovgan - Muse and accurate in doigrovku, 9:7. Confused rally causes, that "Yenisei" not versed with the second touch after Maciej discounts, 11:8…

The hosts fell errors - SCREAM comes on line when attacking Pipe, Ereschenko feeds into the grid, 14:10. Then earned a block of "Gazprom-Ugra" - Aksyutin, came out against his team (Surgut he leased) closes Klets, Muse writes Skrimovu covers the same Klets, 18:12. Krasnoyarsk they go into a long chase - twice precise in attack Ereschenko, with the filing of earning points SCREAM, 18:15. In the end the situation of trying to sharpen Strilchuk Ace at the front line, 22:19. But do not let the opponent Surgut, and the point of putting a blow to the MUSE line, 25:21.

At the beginning of the second set on the pitch raged Ereshenko - three aces, Muzaya kick into touch and 1:6. Surgut gradually return to the game: SCREAM stopped block (3:6), excellent flow Chereiskaya Aksiutin gives a chance to handle the ball rolling (6:8). after the episode, where screamo and could not throw the ball over the net alarm, but our blocking managed to touch the grid (9:13) thought, that luck in this set on the side of the hosts. And then there's the muse attacking unit, 12:16.

Ace mood raises all the same Chereiskaya, forced the professor to be mistaken reception by Alexander Yanutova, 14:16. And here is the owners and got into the network, 16:17. Two hitting streak Ereschenko out in the fourth zone of the favorite high balls roll over a picture on the scoreboard - 19:18. In the end the competitors go on the balance sheet, 20:20. Mutual mistakes led to the mark 23:23 and the first set-ball for his team earned Kirill Klec - its supply of Surgut took somewhere in the column area, but we have not been able to throw. Muse restores parity, And it completes its own marriage Krasnoyarsk: Strilchuk wrong and Ereschenko, 26:24.

In the third set equal to the level of the game was 8:8, Klec then hit out of bounds, and Chereiskaya closes Beetle attack and scored in the next draw, 11:8. Valentine released instead Strilchuk Roman Zhos not find mutual understanding with a partner - not waiting for transmission Klets, 15:11. The site returns Strilchuk, and set and match roll to its logical conclusion - double block registered released instead Kritsky Nalobin, 21:16. When Alexander Klimkin replaced Skrimova young Danilo Gavrilov, thought, it looks like a white flag.

But first the young doigrovschik scored twice in the attack, and when the score 24:20 I went to feed. Then there was a benefit of Daniel, though, of course, we can not ignore the psychological factor, Surgut has forced decision to dodge the balls, flying in the area. deciding, that the match will end by itself, gazpromovtsev almost stopped playing, and when it came to their senses, It was listed on the scoreboard 24:25, and in the statistical report - three aces Gavrilova, sent steady hand.

Belated desperate struggle led, Nevertheless, "Gazprom-Ugra" in another match-ball after the block, Jan Ereschenko, 27:26. And we had all the chances to win in three sets: "Yenisei" has taken on our side, but we have not finished off the ball rolling, and then tore off the attack Muse, sending the ball parallel to the field in the deepest out. Contact wave not long in coming - Klets returned the set-ball owners, Gavrilov and party scored a hero of the fourth zone after, how Ereschenko pulled in the defense attack Muzaya, 28:30.

Similar comeback often lead to psychological and Scrapping, Consequently, gave the initiative. But Surgut managed to forget what happened and began to treat the torn nerves of their fans - the first unit: closed Gavrilov, Klets, Ereschenko ... Kastylenka scores - 5:2. Rukavishnikov, generally safe and beautiful places who played a match, shifts the focus in attack on Dovgan - Dmitry Zhuk so I was not expecting this, that gave way to Ruslan Hanipovu. A Dougan different and Protection, making it possible to implement the muse doigrovku, 12:8, and on the pitch - ace and knocked on the reception translated by 14:8.

Young Gavrilov does not give up - ace, 15:10. Klimkin throws into the fight and Skrimova Zhosya and after the attacks of Bulgarian striker Rafael Habibullin the line takes a timeout with the score 18:13 - it is important not to allow the chase. At first, it is impossible - Zhos draws ace, 14:18. But then a great feed in Skrimova responsible Chereiskaya - Todor after his admission has downed an emergency ball into the net, 20:15. Kastylenka insures deductible ball after zubodrobilny attack Muzaya unit, Aksyutin brings to mind the case an attack on one's fingers, 22:16. Block Gavrilov, it seems, removes all the questions, 23:16. "Yenisei" still manage to save one draw - Yanutov breast Dovgan stops hit on the rolling ball, Klets projectile and places the exact angle. But then he can not cope with Cyril feed, and then a series of blocks in the first match-Bole (stopped Gavrilov, Hanipov, Gavrilov and again, finally, Klets) brings victory "Gazprom-Ugra".

As the saying goes, better late than never. Having won in Krasnoyarsk is not so much in a grave, but in a nervous match, Surgut on short step away from the depths of the standings and clung to the tail escapes into a playoff contender. Ahead of Surgut way for real heroes: "Zenit-Kazan" – "Torch" – "Zenit-Kazan".

All words are spoken
Again, on the Volga
Last news