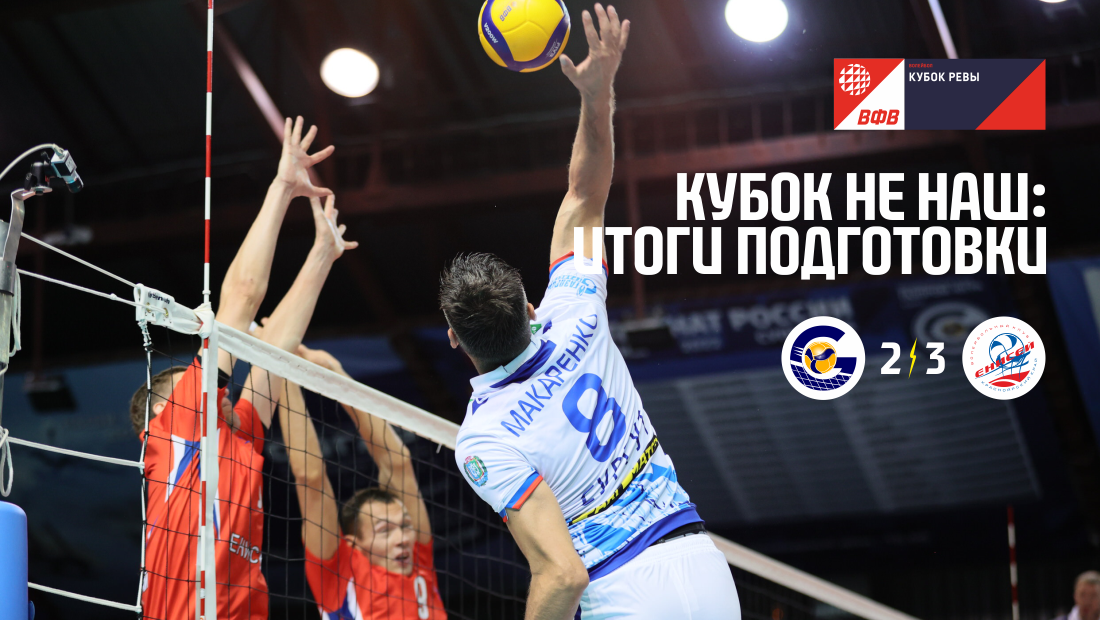 The cup is not ours: results of preparation

Preparation for the season through masochism was a success - Gazprom-Yugra, at the end of the cup battles, lost in an unspecified mast to Yenisei 2:3, although I could have won and come out at least some positive before the start of the championship. But the people of Surgut are not looking for easy ways.

There is no point in describing the match against Krasnoyarsk, we saw nothing fundamentally new. However, it is not necessary to sprinkle ashes on your head and about not reaching the semifinals of the Russian Cup - it is still unknown, good will there be cup games at the height of the season or not, but to count on getting into the finals for now, Alas, not necessary.

Let's try to summarize, closing our eyes to the result - after all, the last tournament was initially presented as a stage of preparation for the championship. What we saw? Let's start with the positive: pleased the libero as never before. I have not looked at statistics, but Kabeshov and Eremin visually looked in perfect order. For once, we have no experiments in this position., but quite a reliable "armor", which gives hope for a good base for building an attacking game.

In attack, progress is noticeable in the fourth zone, and not the arrival of Ilya Kovalev is the reason. Ukrainian legionary just looked tired after Euro, he needs to take a breath before a difficult season - the potential is visible, but not yet implemented. Nikishin was added, Kastylenka, Makarenko. And let the game go on in waves, but already seen, that the guys are gaining condition and can drag - if not the whole match, then at least sets. And rotation, basically, allows the coaching staff to select the best options, including Fialkovsky, who is leaving only for serving.

With the centers, everything is not so simple. At first, there are only three of them. And if Yakutin begins to justify the title of Super League player, then Ropavka is still damp. He also had good stretches, but there were also outright failures, besides, on the block, he is not yet impressive. Dovgan will reach its level, but, repeat, slightly embarrassed by the lack of a wider rotation or at least a clear attacking threat, which was Chereysky, and to him Krsmanovich. Plus - the presence of all central blocking power aggressive feed.

The hardest part is trying to evaluate the play of the binders.. It's easier with Lukyanenko, since he played little and talk, by and large, there is nothing yet. obviously, that letting Ivan go to the front line is not the best option, but he can and should change the game pattern at the exits from the back line. As for Rukavishnikov, it is still uneven. At times beautiful and heroic, at times - a frank marriage, sometimes Evgeny is let down by the attackers, sometimes he is their. Lack of synergy with Rajab is surprising: like in the last season we found the necessary speed and altitude, and something strange is happening in this. But most importantly, that Rukavishnikov is a fighter, psychologically stable and able to forget about failures, do not "swim".

Well, our main failure for today is the game of diagonal. Rajab still looks like a very pale shadow of himself from the second half of last season.. His trump cards: speed, sharpness, brush - don't work. The feed flies past the site. Do not know, what is the reason, but I hope, that this is a temporary phenomenon and a talented player will be able to overcome the circumstances and return to the game. Alekseev, designed to compete with him, also not at all impressive yet. No condition, no power, no result. In recent games, it was striking, that Rukavishnikov is forced to pass to the diagonal only in extreme cases, but without the diagonal we won’t win anything, it is a fact.

Well, in general: the quality of team volleyball is determined by the game on the set. How well the team is able to handle the ball in more or less standard situations, how confidently you are ready to outplay your opponent from an attacking position. Surgutyans in recent games have noticeably added on the serve, in defense, created a lot of pre-game moments for themselves (which, however, also needs to be brought to mind), but this is the standard, the game on filming brought to automatism often became a stumbling block, brought tangible losses. Maybe just because of the falling out of the diagonal, maybe from psychological uncertainty in their own actions, from the lack of automatism - the coaching staff will have to deal with this. The season for Gazprom-Yugra will be difficult, but we continue to believe in our team and we know, that she is able to noticeably add during the season.

Plus libero, minus the diagonal
Gazprom-Yugra before the season
Last news