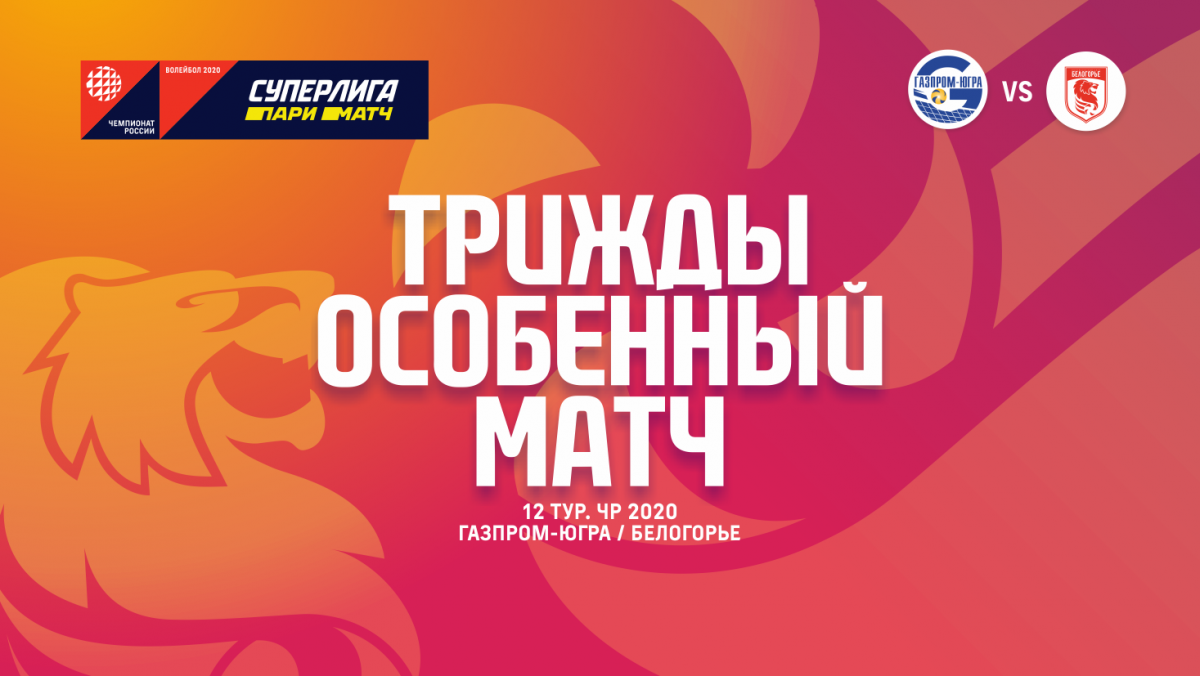 The upcoming game "Belogorye" - is special for several reasons. At first, She - the last in the past year, after it will be a protracted break, related to the participation of European teams in the Olympic qualifying tournament (there, in particular, go libero "Gazprom-Ugra" Teodor Teodor Salparov).

Secondly, it will be a watershed for the Surgut team. Beat "Belogorye" - catch up with the opponent of Defeat and scoring, and return to the playoff zone. Cede - will increase the backlog and, respectively, there is a need to include a survival mode.

Thirdly, we played with "Belogorye" in Belgorod and on the results of the game formed a certain payback, that would be good to return.

Will make it, by itself, not so easy. Even taking into account the current imbalance in one of the two most titled teams of the country - and for the "Gazprom-Ugra" does not shine in the current stability of the season. Both teams are virtually "reset to zero" before the start of the championship and experience the same problems with the search for a new face.

But if Surgut limited resources forces them to concentrate mainly on the extraction of internal reserves, the Belgorod, With a broad line of young performers (including on the coaching bench), We made a real leap-frog.

So, in the rotation of the club there are three roughly equivalent coach (Alexander Kosarev, Slobodan Praklyachich and Vadim Hamuttskih), a place on the edge of the field in Kosarev with a relatively recently adopted Serbian expert. Also the club during the championship already tried four binders (Воропаева, Ismailova, Abramycheva and Bagreev), and wide range of involved doigrovschikov - Penchev, Tetyuhin ml., Spodobets, Semyshev, Кузнецов… Стабильное место в составе разве что у опытных игроков: Luburicha diagonal and central Gutsalyuk with Chervyakov, plus a couple Liber Zelenkov - Maksimenko.

In the last round "Belogorye" played with the "New", and there did not appear on the site Captain Alexander Gutsalyuk, and Anton Semyshev and did not hit the bid - he has a shoulder injury, last game he even spent as libero. Presumably, in Surgut Gutsalyuk play, Do Semyshev recovered - question. And there are questions about "Belogorye" many, what, of course, in a sense, it makes it difficult to match tactical training. Toth gf Rosalind Penchev, rather vaguely started the season, in a match with "New" gave enchanting game - here and think, Is this a recurring flash output or the expected level of dedication?

game show. obviously, Surgut that we must be flexible, ready for anything. However, It will be a certain "X-factor" and in the "Gazprom-Ugra": expected to debut doigrovschika Alexander Boldyrev. Once he gave high hopes, I played for the youth national team, but a little behind outlasted more experienced colleagues in the Moscow "Dynamo", and then I could not get into the base in the "Nova", Petersburg "Zenith" and "Dynamo-LO". The potential of the player, certainly, there is. maybe, "Gazprom-Ugra" for Alexander - the same chance to finally prove himself fully.

Overall, the sign is about the: supervazhnye match for both rivals with a lot of unknowns. The chances of winning are about equal, but said they were, these chances, when the teams enter the pitch and fight for every point? In these games important factor is the support stands, able to inspire kids to something, not calculate analysts. Come on Saturday at "Prime-Arena", Support team - may be your vote will be decisive!