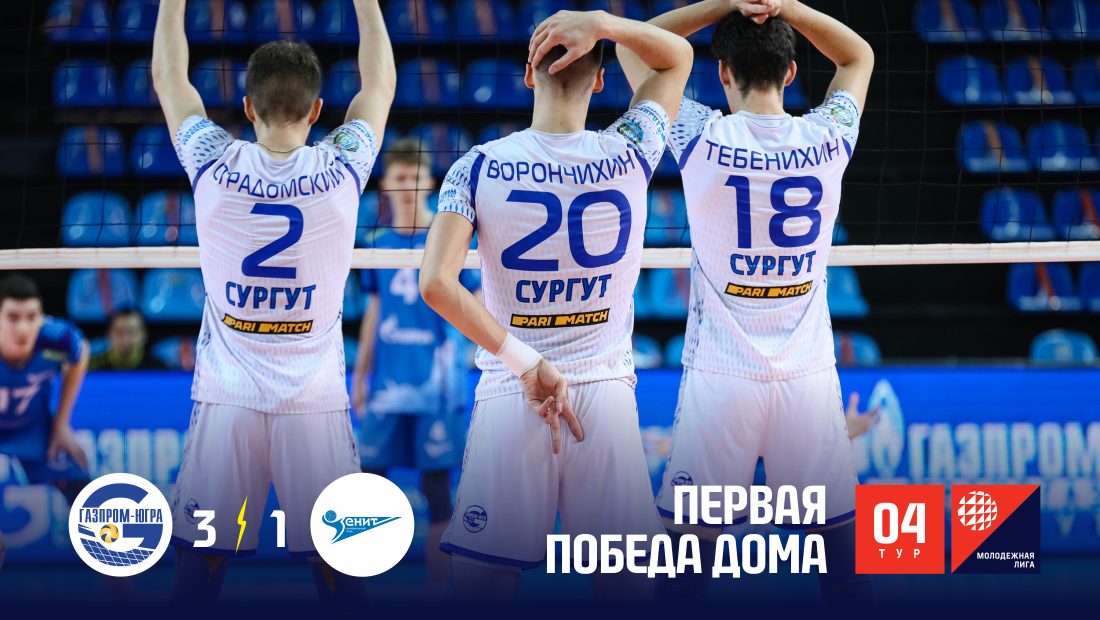 "Star of Yugra" started the first set well. Ace Tebenikhin, Stradomsky's attack and the scoreboard – 5:3, we are ahead. But the Petersburgers pulled themselves up and already in the opening of the game took the lead. Zenit-2 is good on the block, sorted out with Kirillov's discount, then ace when counting 5:7 and the first time-out for Surgutyans. In the middle of the game, Zenit scores a beautiful ball on serve – 12:15 and for the second time-out, the coaching staff of Zvezda Ugra has to take. Ours compare the score with Pavel Stradomsky's ace and Max Kirillov's attack, score 17:17, but again marriage is in our attack, and the Petrograd block is impenetrable and we are already three points behind. With this difference in the score, we come to the end of the set – 22:25. 0-1 in favor of "Zenith-2".

Second set – and again equal play. A series of mistakes in the serve both at us and at Zenit and at the beginning of the game. – 5:5. But then Zenit-2 continued to feed into the network, marriage in second gear, and "Zvezda" has a block, ace Stradomsky, causing dissatisfaction with the refereeing of our counterparts, Surgutyan block again and we earned five break points -10:5 . In the middle of the set, Zenit-2 tried to level up in the score. Ace Petrograd and a reliable block 8 Kirill Ionov's numbers have closed the gap - 17:15. But that's all - "Zvezda" again gains 4 points on its serve. As a result, the victory of the Surgutyans – 25:20 and the score for the sets is equal 1-1.

A good attack by the first pace of the Surgutyans when counting 6:3, then again four balls on its serve and the score – 13:8. Until the final stage of the game, ours only increased the lead – 25-17. And we are ahead in sets - 2-1.

In the fourth game, Zvezda's advantage was in everything. Ours made fewer mistakes, Captain Pavel Stradomsky was traditionally reliable. Zenit-2 is trying to level the score, takes risks and makes mistakes again on the serve. And we have the first pace, discount again and Kirillov's murderous ace – 9:6 at the beginning of the game. When counting 12:7 Zenit-2 coach Tatyana Obraztsova takes the second time-out, but in the middle of the set, St.. At the "Star" – short serve by Pavel Vokhmyanin, then we put a fence on the block and on the scoreboard already – 20:9. With such a difference in the score, our coach gives the opportunity to play Rimal Ganiev, you must try in the game all the declared composition of the youth team.

At the end of the set, Pavel Tebenikhin attacks with the first tempo -23:15,again ace Kirillova – 24:15. On matchball - the "Stars of Ugra" block works and victory in the set and in the game 3-1.

Andrey Chirkov, head coach of the Zvezda Ugra team: Despite, that the first pariah failed because of mistakes, in the second set we straightened and played reliably. In general, we are satisfied with the result, setter Kirillov helped the team well both under the net and on the serve.

Tomorrow the game with the team "Dynamo-2" from Sosnovy Bor. We wish you an excellent mood and good, beautiful game for our guys!